State Government Cuts and the Economy

A Wall Street Journal news article by David Harrison claims, “State and local government spending and employment levels didn’t fully recover from the 2007-09 recession until last fall, a decade after the downturn ended and only a few months before the coronavirus led to a new round of cuts.” The article reiterates, “Public spending and employment didn’t return to their previous peaks until last fall.”

With regard to spending, those statements are in error and the WSJ should run a correction.

Figure 1 shows total state and local government spending from Bureau of Economic Analysis national income Table 3.3 in raw or nominal dollars. Spending grew during the 2000s, hit $2.4 trillion in 2009 and flat‐​lined for a few years, then began growing again to reach $3.1 trillion by 2019. 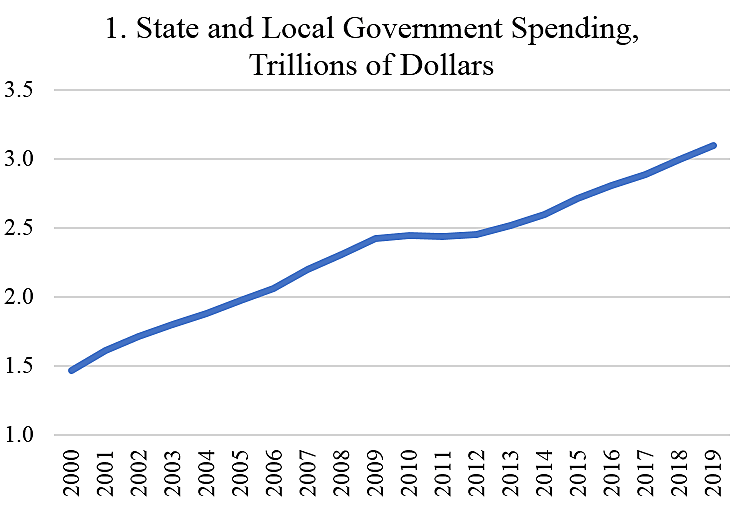 The WSJ was likely referring to real or inflation‐​adjusted spending, but the article does not say that. In Figure 2, I’ve converted spending to 2019 dollars using BEA’s state‐​local deflator. Real spending spiked in 2009 and then dipped a bit below the pre‐​recession level. Spending then began growing again and eclipsed the 2009 peak by 2016. 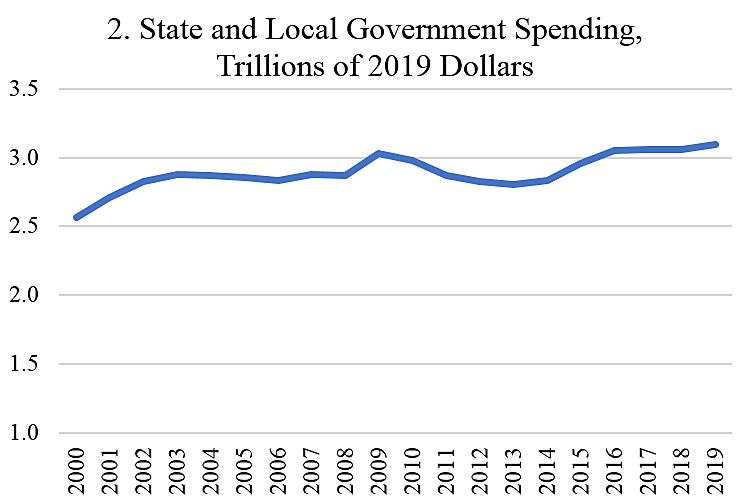 The WSJ article includes a chart showing state‐​local government employment dipping from a 2009 peak of 19.8 million to a trough of 19.1 million, then rising to 19.9 million earlier this year. The government workforce was thus trimmed 4 percent before expanding again. Why is that a big deal? Why shouldn’t governments tighten their belts during slowdowns just as individuals and businesses do?

Over the longer term, shouldn’t governments be improving their productivity to provide services at lower costs with fewer workers? Shouldn’t computer advances be making, for example, policing more efficient allowing us to shrink police department bureaucracies? The private sector continually strives to do more with less and improves its productivity steadily over time.

News stories in the Wall Street Journal often tilt Keynesian. Higher government spending is presented as helping the economy, while spending restraint harms it. The state budget story quotes a Harvard economist claiming that the economy gains up to $2 for every $1 of state spending—the WSJ calls this a “principle.” But it’s not a principle, it’s a theory. An alternative theory—which the reporter should have noted—is that there is no free lunch, that government spending results in harmful extractions from the private sector and overall reductions in GDP.

The WSJ story quotes Fed chairman Jerome Powell saying, “We have the evidence of the global financial crisis and the years afterward where state and local government layoffs and lack of hiring did weigh on economic growth.”

Powell is being naive. I suspect he is thinking about state‐​local government output or valued‐​added portion of GDP (in Table 1.1.5). He’s implying that if that portion isn’t growing, then GDP must fall. But that is one‐​sided accounting. State‐​local governments fund their GDP portion by taking resources from the private sector, so if the state‐​local portion is cut, then more resources stay in the private sector and support private‐​sector expansion.

(In referring to “spending,” the WSJ story is probably also referring to government output or value added. But that is only a portion of total state‐​local government spending).

The real issue is whether resources add more value in the government sector or the private sector at the margin. If state‐​local cuts eliminate low‐​value activities allowing resources to be used for higher‐​value private activities, then the cuts that Powell worries about would add to GDP, not reduce it. If state governments hire more computer experts to code expanded subsidy programs, those experts are not available to help private high‐​tech firms expand.

What is the proper size of government to maximize GDP? That is a complex question because we cannot rely on markets to discover the answer, as we can for, say, the proper size of the beer industry in GDP. We don’t know the marginal value of adding dollars for public schools and fighter jets versus leaving the dollars in the private sector to fund car manufacturing and wheat production. But we do know that there is a trade-off—that there is no free lunch as news stories on government spending often assume.

These issues of proper government size are discussed in this study.

Reasons against federal bail‐​outs of state and local governments are discussed here.