CNN​Money​.com reports on how state governments are digging themselves deep into debt. The story points to Moody’s Investor Service data on “tax‐​supported” debt, which is bond debt that state taxpayers will ultimately have to pay back.


The article shows the large variations in government debt across the states, and notes that “not every state is ratcheting up its borrowing. Many states have strict laws governing their debt issuance. Some places, such as Nebraska and Wyoming, have virtually no debt.”


I’ve argued that all state governments ought to follow the no‐​debt approach to state finance. With good planning, capital expenditures can be financed “pay‐​as‐​you‐​go” or out of current revenues. Debt creates bad incentives for politicians and makes it harder for citizens to understand complex state budgets.


The CNN​Money​.com story notes that state debt soared 10.3 percent in 2009 as the economy struggled. But I’ve noted that Federal Reserve data shows that debt has soared in good times and bad over the last decade. The Moody’s data tells the same story, as shown below. 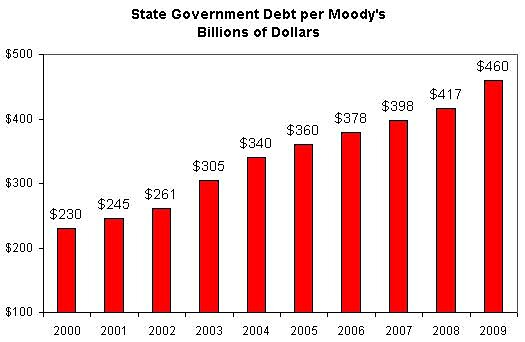