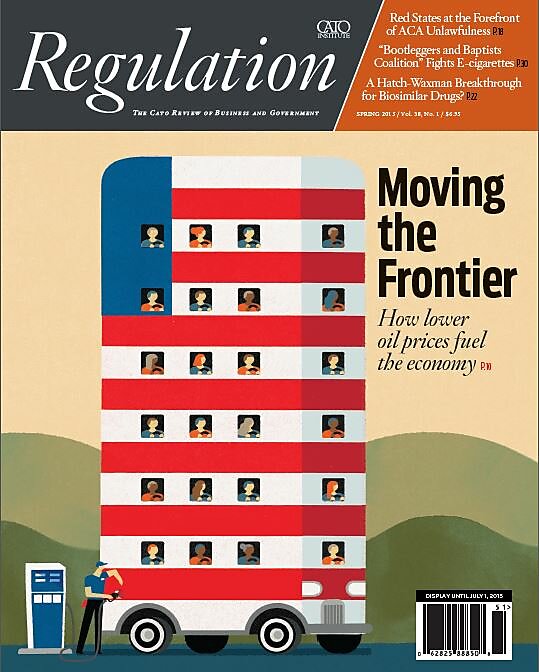 This week, Cato released the Spring issue of Regulation.


The cover article, by economist Pierre Lemieux, argues that the recent oil price decline is at least partly the result of increased supply from the extraction of shale oil. The increased supply allows the economy to produce more goods. This benefits some people, if not all of them. Thus, contrary to some commentary in the press, cheaper oil prices cannot harm the economy as a whole.


A related article examines the dramatic increase in crude oil transported by trains and whether additional safety regulation of tank car design should be enacted. Economist Feler Bose argues that companies have an incentive to reduce accidents to reduce insurance rates. Thus less‐​obvious ways to prevent accidents, like better track maintenance, may be more cost‐​effective and undertaken voluntarily to reduce insurance costs.


The issue has three articles on health policy. Cal State Northridge professor Shirley Svorny describes how state medical licensure boards do very little to discipline doctors who cause medical errors. Instead, medical quality is created by the private decisions of individual hospitals to grant privileges to doctors to treat patients and the decisions of specialty boards, such as those that govern cardiology, to certify members as qualified. A second article concludes that the regulation of electronic cigarettes is likely, even though the evidence for adverse health effects is thin, because a powerful coalition of existing cigarette companies and anti‐​smoking activists would benefit. A third article examines questionable legal maneuvering by states to implement aspects of the Affordable Care Act (Obamacare).


Finally, two articles describe the regulation of emerging technologies. The first, by Oxford’s Pythagoras Petratos, examines nanotechnology and argues that both the Food and Drug Administration and the Environmental Protection Agency are ill‐​suited to regulate this complex technology. This bureaucratic burden could slow nanotech innovation in the United States. The second article, by Henry Miller of the Hoover Institution, describes the regulation of so‐​called “biosimilar” drugs. Biosimilars are “generic” versions of patented biologic drugs, which are produced by living cells through genetic engineering rather than the chemical reactions used to produce traditional patented and generic prescription drugs. He concludes that clinical trials will be necessary to prove biosimilarity and thus “biosimilar” drugs will not be cheap like traditional generic drugs.