Splitting Hairs on the Cadaver

With the introduction of major Senate bills to reauthorize the Elementary and Secondary Education Act -- aka, No Child Left Behind -- the race is on to dissect the legislation and declare a winner. To my mind, however, both significant efforts are improvements over NCLB, ending many of its more absurd components. And the debates the bills are fomenting -- more or less compulsion on teacher evals, firm progress goals or looser, and so on -- are ultimately splitting hairs on a cadaver. The last nearly fifty years have shown that any federal involvement is doomed to failure, and the only rational response to that is to end Washington's meddling.

First, a very quick history of federal involvement: In 1965 Washington enacted the ESEA, with the goal of equalizing resources between rich and poor students. For about twenty years the feds mainly just spent money, but that seemed to produce no significant educational benefits. In roughly the mid-eighties people started to get fed up with that, and slowly pressure grew to hold schools and states "accountable" for their use of federal dough. The pinnacle of that was NCLB, which was festooned in rhetoric about "annual progress," "proficiency," and "leaving no child behind," but mainly appeared to produce bureaucratic demands and name-only proficiency.

Bottom line: There's little evidence that either spending money or "accountability" has worked. Why the futility? Because federal policy is ultimately driven by what makes politicians look best, which at first was spending dough to show they cared, then making unrealistic, inevitably gamed demands to show that they cared in kind of a tough-guy way. And whether any of these things eventually translated into academic success has meant nothing for the politicians who voted for them because few voters connect failure to individual pols.

The good news is that in light of the NCLB debacle there seems to be pretty bipartisan agreement that it's time to reduce the federal footprint. Nonetheless, there are still lots of assertions grounded in neither strong logic nor principle being made about what Washington should be doing.

To illustrate this I'm going to pick on AEI's Rick Hess a bit. Rick, by the way, is overall very clear-headed and skeptical about federal policies, more so than most edu-analysts. He just happens to have published a blog post recently that offers a few, relatively constrained, examples of what I'm talking about, providing a target of opportunity. I quote from the end of his piece, where after comparing and contrasting the major ESEA-reauthorization plans he offers three things he thinks the feds should do:

First, it's appropriate and helpful for the feds to insist upon transparency and clean reporting of performance and spending data as a condition for federal dollars. This entails special attention to the information regarding vulnerable populations and communities, including bright line guidelines regarding regularity of reporting, what gets reported, and so forth.

Second, the feds can offer support for leaders who choose to step out front, without trying to dictate just what those policies should look like. Hence, better to award Title 2 funds to states pursuing ambitious plans for teacher evaluation than to lay out a particular system of evaluation or mandate its adoption. Providing competitive funds for those state and district leaders willing to tackle the tough task of upending century-old routines focuses those dollars in useful ways and makes it more possible for those leaders (and the union chiefs with whom they're working) to present efforts to rethink tenure, pay, evaluation, and the rest to affected teachers as a potential win-win.

Third, basic research is a public good, and one that demands an active federal role. In principle, I'm supportive of Senator Bennet's proposed amendment to create an ARPA-ED. That said, the focus must be on cultivating new tools and technologies that will fuel problem-solving. If it's designed to focus on "reforms" and implementation-dependent strategies, then I'm going to jump off the bandwagon real quick.

So, point 1: transparency. It is in vogue these days to condemn NCLB, but quickly add that the law deserves huge credit for forcing districts and states to disaggregate testing results to reveal how various student subgroups are performing. Presumably, we knew nothing about these kids before NCLB.

Accepting for a moment that we really did know nothing -- an assumption belied by decades of education civil rights actions before NCLB -- did all this new attention do any good?

We can begin to answer that by looking at National Assessment of Educational Progress outcomes for those groups that have typically struggled the most -- generally, low-income kids -- and seeing if their scores erupted under NCLB. What follows are several charts for both the NAEP Long-Term Trend (LTT) and Main tests, showing score changes per-year (out of 500 points) in periods between test administrations. Those periods that are highlighted saw greater increases than in the periods completely included in NCLB. Note that a few periods include some years under NCLB and some not. Because it took significant time to fully implement NCLB after it was passed in January 2002, periods that overlapped with the beginning of NCLB are counted as not reflecting NCLB. That is, of course, debatable, so take those with a grain of salt. Also, the best proxies available for income-level are used, which sometimes is parents' education level, sometimes qualifying for subsidized lunch, and once race. 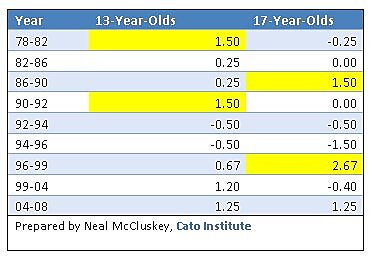 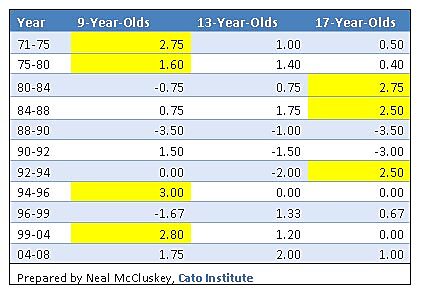 So what do we see? For the most vulnerable students, there are lots of periods before NCLB that had greater gain rates, and many that were pretty close. This seriously wounds the assertion that NCLB created invaluable transparency. At the very least, it didn't create transparency that resulted in massive score gains. Of course, that NCLB "transparency" often involved telling parents their children were proficient when they were really far from it might explain the scores.

Point two: Washington should support states "pursuing ambitious plans for teacher evaluation" rather than "lay out a particular system of evaluation or mandate its adoption." This is a distinction without a difference. Why? Because someone in the federal government will ultimately have to decide what is sufficiently "ambitious" or worthy of reward. All that not specifying that in statute does is leave it to the discretion of regulation writers and, in the end, probably the Secretary of Education. So the feds will still be dictating, it will just be a bit later in the process and with even less transparency than would exist if parameters were spelled out in law. See "Race to the Top" or "waivers" to understand all the additional problems and threats that creates.

Lastly, point three: "basic research is a public good, and one that demands an active federal role." How so? Where, first of all, in the Constitution is the "basic research" clause? Nowhere, which means the feds have no authority to have an "active role" in conducting it. Perhaps as important, why should we think Washington would be good at running basic education research? Why should we think the topics chosen wouldn't be politicized? Or the researchers? Such problems are real even in the hard sciences, and would be even bigger in a heavily politicized, squishy field like education. Meanwhile, we see that the real driver of innovation isn't government, but the private sector. Yes, government sometimes sponsors beneficial research, but also probably crowds out much potential private research funding. And really, was the superior innovator Steve Jobs -- who created better things to make more money -- or the entity that brings us jobs bills?

At this point, it's absurd to keep quibbling over what the proper federal role is. The Constitution tells us that: other than prohibiting discrimination by states and districts, and controlling education in DC and federal lands, there isn't one. That's both the dictate of the supreme law of the land, and the only thing that makes sense in light of  nearly five decades of bankrupting federal failure.