Spending in the Tax Code

The IRS made payments of $4.2 billion last year in refundable tax credits to illegal aliens, according to an audit by the Treasury’s Inspector General. “Refundable” tax credits are cash subsidies — federal outlays — given to people who don’t pay any income tax.


Even by Washington standards, flushing $4.2 billion down the drain in a single year is pretty impressive. And what’s weird in this case is that federal law is apparently ambiguous about whether or not these payments should have been made.


The larger problem here is that the overall cost of refundable tax subsidies has skyrocketed in recent years. The chart shows the outlay portions of the largest two refundable tax credits—the earned income tax credit (EITC) and the child tax credit (CTC). (This is fiscal year federal budget data). 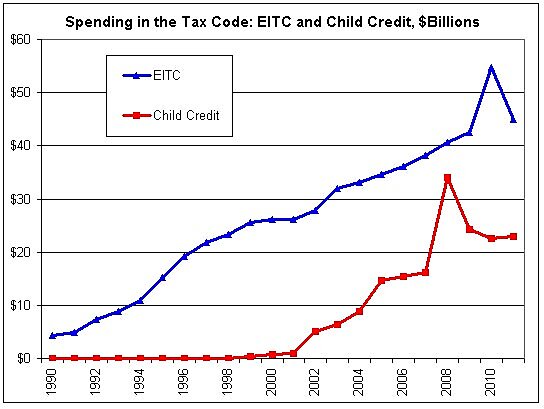 Note that the $4.2 billion paid to illegal aliens is not the only rip‐​off element of these refundable tax subsidies. For decades, auditors have been finding an enormous amount of errors and fraud in EITC payments. The IRS currently estimates that the error and fraud rate in the EITC is between 24 and 29 percent, or more than $10 billion a year in waste.


The CTC and EITC should be scrapped. The CTC started out as a Republican effort to distort the tax code in a socially conservative manner, and it has now morphed into a large welfare program. As for the EITC—any program that hands out one‐​quarter of its spending erroneously and fraudulently is grossly unfair to the taxpayers who are footing the bills.