In a recent column, AEI scholar Abby McCloskey claims that “[m]ost people on the right and on the left” want government‐​sponsored paid family leave. McCloskey links to an admiring summary of a 2016 public opinion poll as evidence.


Unfortunately, the poll’s questions are not sound from a psychology of survey response perspective. As analysts know, the question’s language makes an enormous difference in poll results. When people are asked whether or not they would like a particular benefit sans the process or cost, many will respond affirmatively.


But if costs are mentioned, public opinion transforms (see polling on healthcare for example). As a result, polling can be confusing at best and calculated to elicit certain responses at worst. In the first question, the Morning Consult poll does not describe who will be requiring employers to provide paid family leave or how they will do so. It does not mention tradeoffs. In the second question it asks respondents to accept that government is providing paid leave and then pick the length.


Usually it would be hard to know how much the absence of the “whos” or “hows” mattered for the results. But fortunately, Pew Research asked the same questions and made the details explicit.


Pew found “there is no consensus,” and public opinion was split evenly. Contrary to McCloskey’s summary article which claims political parties unanimously approve of a government mandate for paid family leave, Pew described public opinion as being divided along political lines. Democrats were the only group where a majority strongly favored the lightest of paid family leave measures; using government tax credits as an incentive for employers to provide paid leave. 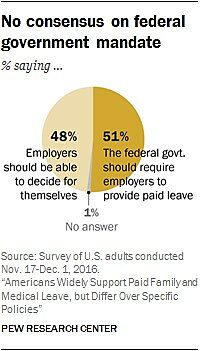 Far from being a top policy priority, another recent Pew poll suggests that “expanding access to paid family and medical leave ranks at the bottom of a list of 21 policy items.” 7 of 10 workers (69%) are at least somewhat satisfied with the benefits their employer already provides, and Americans prioritize other issues over creating an entitlement to a benefit most already receive. 63% of workers who took parental, family, or medical leave say their employer paid for part or all of it.


It seems that the public is divided after all. That said, do Americans like or want paid family leave benefits? Of course, and when asked they say so. But the right question is not whether they like or desire leave, but whether they desire federal involvement. The answer is often “no.”