Sorry to Keep Interrupting Your Folly with the Constitution, But… 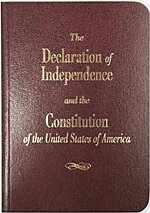 Andy Smarick at the Fordham Foundation continues to simultaneously cajole and sympathize with U.S. Secretary of Education Arne Duncan as Duncan tries to formulate some sort of discernible parameters for what the federal government should and  should not do in education. Clearly, Smarick feels Duncan's pain:

I have sympathy ... because figuring out the right role for the federal government in education policy is no easy task. But I’ve been pointed and nagging because the Department needs to come up with a coherent position if it’s to sell an NCLB reauthorization plan.

Given his apparently long-standing suffering over this issue, it turns out that today is Smarick's lucky day — I have an elixir that defines the only unshifting and unmuddled parameters of federal education policy possible: outside of Washington, DC, and federal properties like military installations, the federal government has no authority whatsoever to be involved in education! Article I, Section 8 of the Constitution makes this clear, including nothing about education among the specific powers it gives to the federal government.

And if that medicine isn't strong enough,  the 10th Amendment doubles it, reiterating that the Constitution gives the feds only specific, enumerated powers:

The powers not delegated to the United States by the Constitution, nor prohibited by it to the States, are reserved to the States respectively, or to the people.

Unfortunately, I've offered this potent treatment for Smarick (and Duncan's) painful problem before and Smarick pretty much just flushed it down the toilet.  Last time, he simply ignored the overwhelming evidence I offered that federal involvement in education has been and will continue to be a bankrupting failure; declared it unrealistic to think that the feds would get out of education; and wondered aloud whether I might also want to get rid of federal entities like NASA. In other words, he completely dodged the critical question at hand: What is the proper federal role in education?

So here Smarick remains, floundering around with Duncan to determine what they think the feds should and should not be doing in education. And guess what they've come up with? The federal role should be anything and everything! It should be pushing whatever programs or reforms Washington deems "successful," or anything for kids it declares "underserved," or that has anything to do with "national" standards.

And what's the role of states, school districts, schools, parents, and kids? To be ready to jump whenever and in whatever direction Washington tells them to:

Pieced together, a slightly clearer picture starts to emerge. If I’m reading it right, it’s something along the lines of “The feds will embrace national standards and assessments; invest in new ideas and successful practices; and allow states and districts to control most decisions unless underserved kids are getting hurt.”

If this is a faithful rendering of the Secretary’s view, the Department has a solid foundation on which to build. But huge questions remain: How far can the feds go with regard to disadvantaged students? How do you remain loose on means and still hold states accountable for billions of dollars? How does IDEA shift away from compliance? How does ED transition from a regulatory body to the NIH of education?

As I wrote above, developing a comprehensive, coherent philosophy on these matters is terribly hard, and we’re watching ED go through the sausage-making phase. I give them credit.

Let’s hope, when all’s said and done, that we look back on this progress like the Beatles Anthology—which shows how impeccable final products typically evolve from messy drafts — and not like the making of Chinese Democracy — a long, agonizing wait that ultimately leaves you wishing for more.

Now, I have to ask: Why would you ever, ever want to subject the nation and its children to a federal government that has potentially unlimited power in education and could very possibly produce calamitous results for all? And why would you want to force schools and children to sit atop a constantly quaking foundation, one subjected to perpetual and potentially disastrous lurching produced by the ever-changing political desires and needs of secretaries of education, presidential administrations, congresses, and self-serving politicians of all stripes?

Quite simply, there is no acceptable answer to that other than "I absolutely wouldn't." And that answer means that the only right answer to the question of what the federal government should do in education is "nothing."

At some point, if we're ever going to make any progress, people need to stop ignoring all the evidence and start dealing with reality.