The United States has recorded a trade deficit in each year since 1975. This is not surprising. After all, we spend more than we save, and this deficit is financed via a virtually unlimited U.S. line of credit with the rest of the world. In short, foreigners in countries that save more than they spend (read: record trade surpluses) ship the U.S. funds to finance America’s insatiable spending appetites.

Japan and more recently China have been the primary creditors for the savings-deficient U.S. And since their exports are largely manufactured goods, the real counterpart of their buildup of dollar claims on Americans is for them to run export surpluses in manufactured goods with the U.S. The accompanying chart shows the contribution of Japan and China to the U.S. trade deficit since the late 70s. 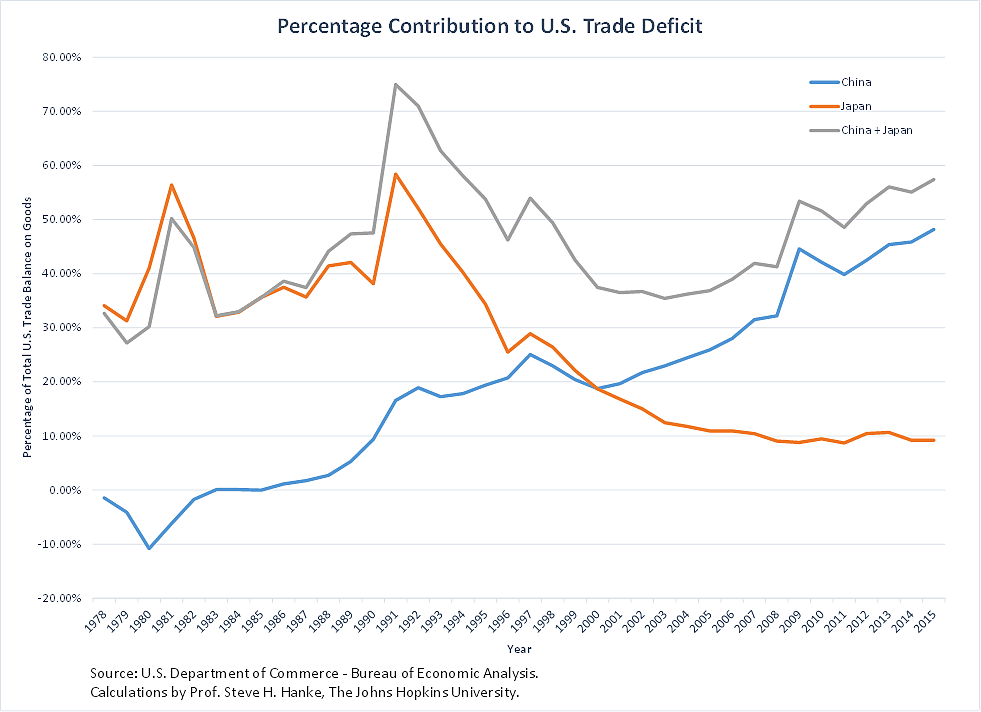 So, the U.S. savings deficiency has contributed to the hollowing out of American manufacturing. But, you wouldn’t know it by listening to President-elect Trump. He never mentions America’s savings deficiency. Instead, he claims that American manufacturing has been eaten alive by foreigners who use unfair trade practices and manipulate their currencies to artificially weak levels. This is nonsense.

To get a handle on why the President-elect Trump – and many others in Washington, including the newly-elected Senate Minority Leader Charles Schumer – are so misguided and dangerous, let’s take a look at Japan. From the early 1970s until 1995, Japan was America’s economic enemy. The mercantilists in Washington asserted that unfair Japanese trading practices caused the trade deficit and destroyed U.S. manufacturing. Washington also asserted that, if the yen appreciated against the dollar, America’s problems would be solved.

Washington even tried to convince Tokyo that an ever-appreciating yen would be good for Japan. Unfortunately, the Japanese caved into U.S. pressure, and the yen appreciated, moving from 360 to the greenback in 1971 to 80 in 1995. This massive yen appreciation didn’t put a dent in Japan’s exports to the U.S., with Japan contributing more than any other country to the U.S. trade deficit until 2000 (see the accompanying chart).

In April 1995, Secretary of the Treasury Robert Rubin belatedly realized that the yen’s great appreciation was causing the Japanese economy to sink into a deflationary quagmire. In consequence, the U.S. stopped bashing the Japanese government about the value of the yen, and Secretary Rubin began to evoke his now-famous strong-dollar mantra. But while this policy switch was welcomed, it was too late. Even today, Japan continues to suffer from the mess created by the yen’s appreciation.

Now, China is America’s economic enemy, and China bashing is in vogue. Indeed, hardly a day goes by without President-elect Trump railing against China, accusing it of unfair trade practices and currency manipulation. He is also threatening to impose huge tariffs on the Middle Kingdom.

At the same time, President-elect Trump is promising a set of spending and taxing policies that will cause the gap between our spending and savings to widen. This will balloon our trade deficit. And with that, Mr. Trump will, no doubt, point an accusatory finger and start a trade war with China, a country that currently contributes 48% to the U.S. trade deficit. So, the President-elect’s promised lax fiscal policies might just get us into a trade war with one of the most important countries in the world.