Should We Spend More on Failed Programs?

Last month, I testified before the House Education & the Workforce Committee. The most startling part of that experience was the response to my testimony offered by ranking Democrat George Miller (who had chaired the committee in the previous Congress.) The archived web‐​cast is now available, and Rep. Miller’s response begins at 42:29.


To set things up: I reported that the federal government has spent $2 trillion dollars on k‐​12 schooling over the past two generations, and failed to achieve either of its avowed goals (raising overall achievement, and narrowing the gaps by family income and minority status). To this, Rep. Miller replied: 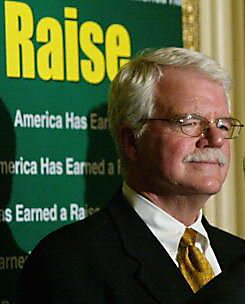 I think when you look at student performance and you look at money and you want to say that somehow there should be some correlation there I think that’s wrong‐​headed.

Really? I know that Democrats support higher government spending than libertarians and conservatives, but it’s always been my understanding that they do this because they imagine the extra spending will actually accomplish something. I have never before heard anyone suggest that we should spend more taxpayer money without any expectation that spending is correlated with outcomes. I can’t believe that Rep. Miller’s view is widely shared by American voters—even by those who voted for him.


The congressman also made what I took to be an effort to undermine the test data I had presented, saying that “After No Child Left Behind, millions of people were added to the test pool that were left out before.”


With respect to the National Assessment of Educational Progress test score trends I presented during my testimony, this statement is incorrect. The NAEP Long Term Trends results have always been based on nationally representative samples of students and to my knowledge NCLB did not affect those sampling procedures in any way. I can only guess that Rep. Miller was referring to the NCLB’S effect on student participation in state tests, but if so his comment is not germane.


Congress really has spent 2 trillion taxpayer dollars and achieved neither of its avowed k‐​12 goals. Cutting these ineffective programs would save scores of billions annually.