Any day now, the Trump administration will release a final rule allowing greater consumer protections in so-called "short-term, limited duration insurance," a category of health insurance Congress exempts from federal health insurance regulations, including ObamaCare regulations. In comments I filed on the proposed version of the Trump administration's rule and an accompanying Wall Street Journal oped, I explained some but not all of the benefits of allowing these consumer protections. What follows is updated and new information about the benefits of allowing those consumer protections.

In 2016, the Obama administration arbitrarily prohibited certain consumer protections in short-term plans. First, it exposed sick consumers to underwriting and loss of coverage by shortening the maximum duration of short-term plans from 12 months to 3 months. Second, it prohibited "renewal guarantees" that would protect consumers who develop expensive illnesses from ever facing underwriting or losing their coverage.

Last year, President Trump urged the Department of Health and Human Services to allow short-term plans to last 12 months and to allow consumers to bridge together consecutive short-term plans with "renewal guarantees" that protect them from being re-underwritten after they get sick. With ObamaCare premiums soaring and the consulting firm Avalere warning of "substantial increases" in ObamaCare premiums for 2019, these consumer protections would mean "consumers could purchase health-insurance protection for 90% less than the cost of the average ObamaCare plan." Renewal guarantees would keep people with expensive conditions out of ObamaCare plans, thereby improving ObamaCare's pools and reducing the cost of ObamaCare. Along the way, allowing these consumer protections would "increas[e] transparency in government and provid[e] voters and policymakers with better information about the cost of the ACA."

Thirty-five senators sent a letter to the Trump administration citing my regulatory comments and urging the administration to implement both changes. But there's more.

The American Action Forum has a roundup of economic projections of the impact of allowing these consumer protections. Every organization that has modeled these changes, including those that oppose them, has found they would increase the number of Americans with health insurance.

These projections indicate that expanding short-term plans would produce significant social-welfare gains. The Urban Institute, for example, projects 2.2 million consumers would leave ObamaCare plans for short-term plans because they would "prefer STLD to ACA-compliant plans." This suggests a large increase in consumer welfare. Similar welfare gains would result from as many as 1.7 million previously uninsured Americans enrolling in short-term plans with the proposed consumer protections.

An often-overlooked benefit of allowing these consumer protections in short-term plans is that they would free consumers to avoid coverage they do not want, including coverage that may violate their religious convictions.

ObamaCare requires all health insurance plans to cover all FDA-approved forms of birth control. This requirement forces devout Catholics and others to choose between going without health insurance or paying to support a practice they believe is an offense against God. The Trump administration has taken steps that protect conscience rights for some employers. But these changes do not protect all employers, much less all consumers.

Since short-term plans are exempt from ObamaCare's contraceptives mandate, allowing them to offer 12-month terms and renewal guarantees would give Catholics and others full freedom to purchase secure health insurance without violating their religious beliefs.

As Susan Marquis and colleagues noted prior to the creation of ObamaCare, “Purchasers derive value from having the range of choices that the individual market offers.” The range of health insurance choices would expand, and consumer welfare would increase not captured by premium reductions, if the Trump administration allows short-term plans to offer consumers a wider range of secure coverage options.

A person initially in good health who develops a chronic illness may expect to have above-average expenses in subsequent years. If the annual insurance premium is set proportional to expected expense in each year, someone who contracts a multi-year condition would face a substantial and unexpected jump in premiums—something public policy finds undesirable and something which a risk-averse person would prefer to avoid. A potential solution to this problem is for the insurance policy purchased when the individual is still in good health to contain a guaranteed renewability (GR) provision which stipulates that no insured’s future premium for the given policy will increase more than any other insured’s premium increases. Thus, people who unexpectedly become high-risk will pay the same premium as those who remain low-risk.

The overarching message from these data is that nongroup premiums do vary with risk, but not nearly as strongly as would be consistent with vigorous risk rating. Perhaps more important, they do not vary at all with risk as measured by chronic conditions...This is not to deny that some people pay very high premiums for their coverage, and that some of the people who do so are high risks. Apparently, however, many high risks do not pay higher-than-average nongroup premiums.

In other words, there was substantial cross-subsidization of high-risk by low-risk persons in the individual insurance market in a period in which there was only minimal state regulation. Premiums do rise with risk, but the increase in premiums is only about 15 percent of the increase in risk. Premiums for individual insurance vary widely, but that variation is not very strongly related to the level of risk.

From an economic viewpoint, the main problem with risk rating is...that the occurrence of an extended illness may subject buyers to the risk that their premium may jump, potentially by several multiples. While a thousand-dollar jump in one’s annual premium may seem trivial compared with the high medical bills the insurance will cover, risk-averse persons would prefer to avoid it. There is a simple way to do so: Buy insurance when healthy but pay extra for guaranteed renewability or protection from cancellation.

The evidence indicates that even before the Health Insurance Portability and Accountability Act (HIPAA) became effective in 1997, the majority of individual policies contained this feature. The intent of guaranteed renewability can be circumvented (for example, by canceling all policies in a class), but it usually is not, for the obvious reason that sale of this feature requires that it be effective most of the time...In recent years some states have required guaranteed renewability, but it is apparent that this was a common feature of individual (not small-group) policies even before it was required. The presence of guaranteed renewability may account in part for the moderate increase in paid premiums with risk, noted earlier.

Although there have been some anecdotes about insurers slipping out of their policy provision to renew coverage at group average premiums for high risks by canceling the coverage entirely, we conclude that on average guaranteed renewability works in practice as it should in theory and provides a substantial amount of protection against high premiums to those high risk individuals who bought insurance before their risk levels changed. The implication is that, although there are some anecdotes about individual insurers trying to avoid covering people who become high risk (for example, by canceling coverage for a whole class of purchasers), the data on actual premium-risk relationships strongly suggest that such attempts to limit risk pooling are the exception rather than the rule.

Indeed, Pauly concludes, guaranteed renewability does such a good job at protecting the sick from higher premiums, regulations that prohibit charging higher premiums to the sick (i.e., community rating) don't change much:

We find that regulation modestly tempers the (already-small) relationship of premium to risk, and leads to a slight increase in the relative probability that high-risk people will obtain individual coverage. However, we also find that the increase in overall premiums from community rating slightly reduces the total number of people buying insurance. All of the effects of regulation are quite small, though. We conjecture that the reason for the minimal impact is that guaranteed renewability already accomplishes a large part of effective risk averaging (without the regulatory burden), so additional regulation has little left to change.

In "Consumer Decision Making in the Individual Health Insurance Market" (Health Affairs, 2006), Susan Marquis et al. find the lower premiums that renewal guarantees make available to the sick made the individual market "a source of long-term coverage for a large share of subscribers." This occurs because enrollees who purchase coverage and then later become sick “are not placed in a new underwriting class.” The authors attribute this to renewal guarantees: “We also find that there is substantial pooling in the individual market and that it increases over time because people who become sick can continue coverage without new underwriting.” The authors also found that, despite underwriting, “a large number of people with health problems d[id] obtain coverage” in the individual market pre-ObamaCare. The authors conclude:

Our analysis confirms earlier studies' findings that there is considerable risk pooling in the individual market and that high risks are not charged premiums that fully reflect their higher risk. Moreover, guaranteed renewal and underwriting only at initial enrollment appear to help promote pooling to some extent, and they protect subscribers from financial consequences associated with changes in their health status.

In "Risk Pooling and Regulation: Policy And Reality in Today’s Individual Health Insurance Market" (Health Affairs, 2007), Pauly and Herring found that as a result of renewal guarantees:

As the MEPS data show, the predicted high risks (above the median) had both high expected expenses (before the fact) and high actual expenses (after the fact); they were roughly four times higher compared with the bottom half. But the premiums that higher-risk people actually paid were only, on average, about 1.6 times those of lower-risk people...At least half of their higher expected expense appears to be pooled, even in the individual market...

Premiums were definitely far from proportional to risk, so there was a substantial amount of risk pooling present...Although in these data people of a given age and sex with chronic health conditions paid higher premiums than people without such conditions, individual insurance, through guaranteed renewability or some other device, pooled 84.5–88.5 percent of the risk... 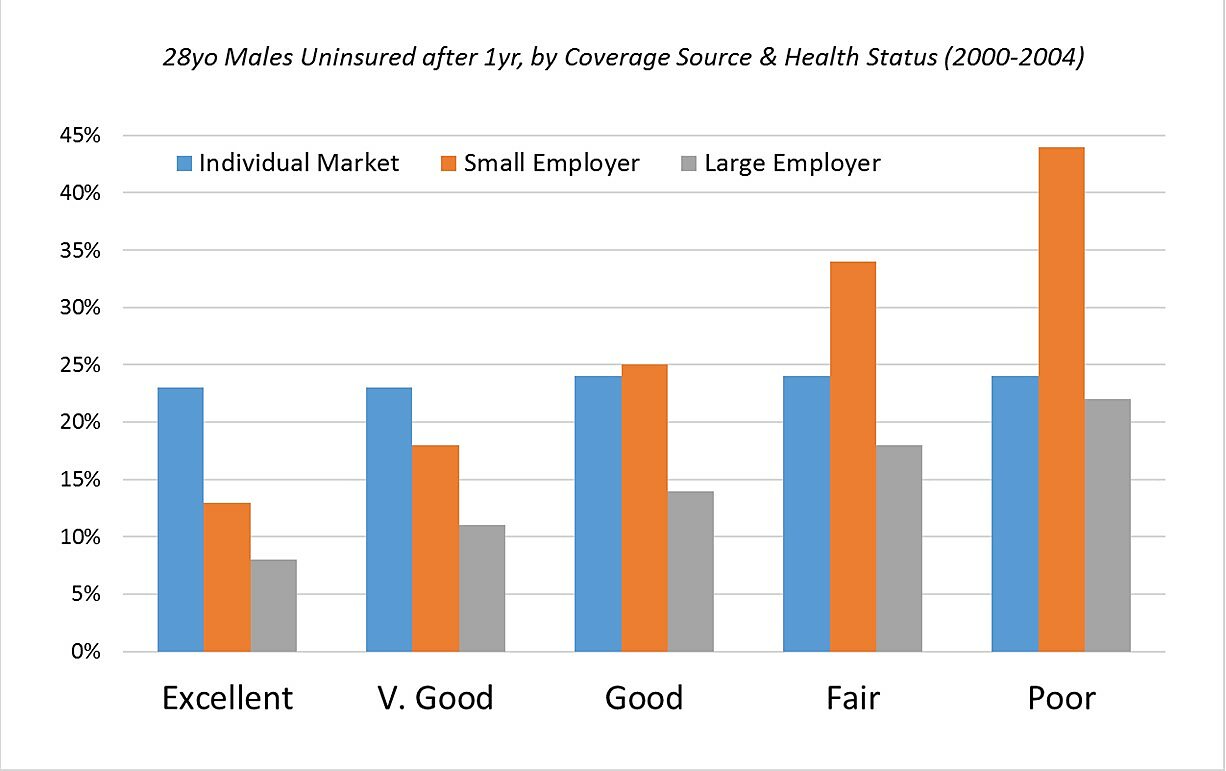 Giving consumers the choice of purchasing renewal guarantees, either in conjunction with a short-term plan or as a standalone product protecting enrollees from re-underwriting in that market, would produce significant benefits well in excess of any costs. It would increase the number of Americans with health insurance, allow Americans to purchase insurance that respects their religious beliefs, and improve ObamaCare's risk pools.