Sending Troops to the Border Is Unnecessary and Dangerous

President Trump recently said that he would deploy troops to the Mexican border in response to the over‐​hyped story of about 1,000 Central Americans who are walking to the U.S. border to ask for asylum, which is their right under American law. “Until we can have a wall and proper security, we’re going to be guarding our border with the military,” President Trump said on Tuesday. “That’s a big step. We really haven’t done that before, or certainly not very much before.” On the contrary, American Presidents have ordered troops to the border to assist in immigration enforcement several times and all of them when the flow of illegal immigrants was significantly greater than it is today.


When the old Immigration and Naturalization Service (INS) launched Operation Wetback in 1954 (yes, that is what the government called it), then‐​Attorney General Herbert Brownell asked the U.S. Army to help round up and remove illegal immigrants. According to Matt Matthews in his “The US Army on the Mexican Border: A Historical Perspective,” the Army refused to deploy troops for that purpose because it would disrupt training, cost too much money at a time of budget cuts, and it would have required at least a division of troops to secure the border. According to Matthews, head of the INS General Swing remarked in 1954 that deploying U.S. Army troops on the border was a “perfectly horrible” idea that would “destroy relations with Mexico.” It was also unnecessary.


It is also unclear what the troops will actually accomplish on the border. Since the members of the caravan intend to surrender to Border Patrol or Customs Officers and ask for asylum, the troops serve no purpose. They will not deter asylum seekers. Border Patrol agents are not overwhelmed by entries even though they constantly plead poverty in an effort to capture more taxpayer resources. The most likely explanation for the proposed deployment is politics, just like the previous deployments.


Since 1982, most U.S. military deployments and operations along the Mexican border were intended to counter the import of illegal drugs. The regular deployment of troops for that purpose ended in 1997 after a U.S. Marine shot and killed Esequiel Hernandez Jr., an American citizen, as he was out herding goats. By July of that year, Secretary of Defense William Cohen suspended the use of armed soldiers on the border for anti‐​drug missions.


On May 15, 2006, President Bush ordered 6,000 National Guard troops to the border as part of Operation Jump Start to provide a surge of border enforcement while the government was hiring more Border Patrol agents. In 2006, there were about 59 apprehensions per Border Patrol agent or one per agent every four days. Operation Jump Start ended on July 15, 2008. In that year, there was an average of one apprehension every nine days per agent during the entire year. President Obama also deployed 1,200 troops to the border in 2010 to assist Border Patrol during a time of falling apprehensions. They left in 2012. In that year, Border Patrol agents individually apprehended an average of one illegal immigrant every 16 days.


The two recent deployments to assist in enforcing immigration law along the border occurred when there were fewer apprehensions, represented by more days between each apprehension for each agent (Figure 1). The higher the number for the blue line in Figure 1, the fewer people Border Patrol agents individually apprehend. From about 1970 through 2006, the Border Patrol faced an annual inflow of illegal immigrants far in excess of anything in recent years yet President Trump has decided that this is the time to put troops on the border. 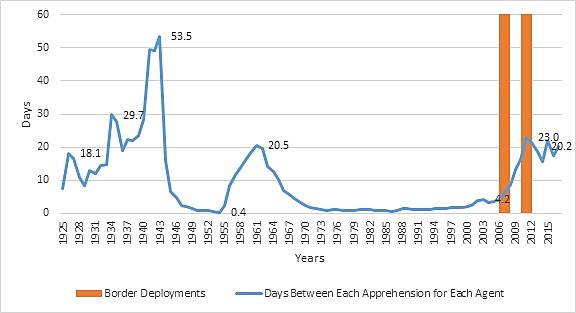 Sources: Customs and Border Protection and Immigration and Naturalization Service.


Whether President Trump’s proposed deployment of troops along the border is legal is a difficult question to answer. The use of the military in domestic law enforcement has to be authorized by Congress but they have authorized it for drug enforcement several times along the border. Furthermore, border enforcement might be distinct from domestic law enforcement as even the rights of American citizens are legally curtailed in border zones. Additionally, Congress arguably granted funds and a blanket authority to deploy troops along the border in the Defense Authorization Act for 2005 to defend against a “threat” or “aggression” against the territory or domestic population of the United States. As with most powers, Congress has ceded most of its authority to the President in this area.


Regardless of the legalities, the proposed deployment of American troops to the border without a clear mission at a time of low and falling illegal immigrant entries is an unnecessary waste of time and resources that could put Americans in harm’s way for no gain.