The Medicare program is a bonanza of centralized economic planning, special-interest lobbying, pricing errors, perverse incentives, low-quality care, improper payments, and fraud. To paraphrase Lenny Bruce, Medicare is so corrupt, it's thrilling. It is so corrupt, we at the Cato Institute just published a whole book -- Overcharged -- about how corrupt it is.* That book has a section called, "Medicare Part D: The Always-Pouring Pitcher of Drug Fraud." Overcharged recounts how "the passage of Part D is associated with a large increase in the average launch price of oncology products." It quotes Senate Finance Committee chairman Charles Grassley (R-IA) as saying, "It may be that some drug companies are taking advantage of government programs to maximize their market share." (Gee, ya think?)

Today, the Senate Finance Committee will consider legislation that attempts to fix some of those problems by changing the way Medicare pays for certain prescription drugs. The specifics of the proposed changes are mind-numbingly complex. They have been known to cause health care wonks to scratch their heads and non-health care wonks to flee the room. If you want to read about the particulars in all their wonky glory, click here.

The most significant changes regard Medicare Part D. Many of these changes would be beneficial. Two of them -- a redesign of Part D "standard coverage" and a cap on subsidies to drug manufacturers -- would save taxpayers a projected $85 billion over 10 years. Predictably, the people to whom that taxpayer money would otherwise flow are trying to block those savings. (See "special-interest lobbying," above.)

We begin with some background on Medicare Part D.

Medicare subsidizes those premiums, generally at an amount fixed at 74.5 percent of the average plan bid. The enrollee pays the remainder of the premium, which can vary based on generosity of coverage and other factors.

The insurers negotiate prices with drug companies and Medicare pays insurers additional amounts based on the quantity of drugs enrollees use and those negotiated prices.

Medicare requires participating insurers to offer a "standard coverage" plan, for which Congress rigidly defines enrollee deductibles and cost-sharing, as well as the rules for that second category of Medicare payments to plans.

The legislation would redesign and simplify the Part D benefit in three principal ways. 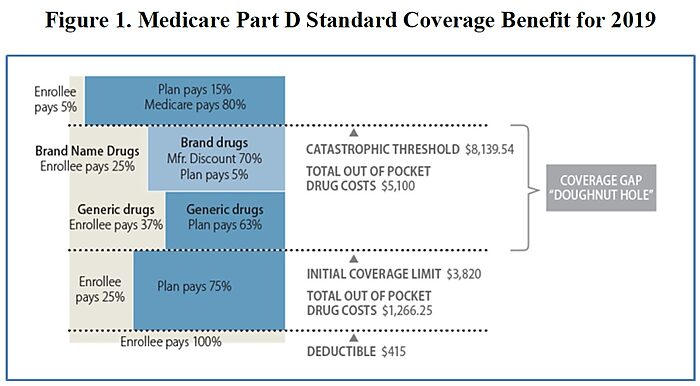 The proposed legislation would cap enrollees' out-of-pocket exposure at $3,100 in 2022 (indexed to growth in Part D spending). Beyond that point, enrollees would pay nothing for their drugs. (See Figure 2.) That's a problem. All else equal (see below), eliminating enrollee cost-sharing above that threshold will cause Medicare spending to rise. When enrollees pay nothing for their drugs, they have little or no incentive to switch to lower-cost drugs or to avoid low-value expenditures. The elimination of cost-sharing above that threshold would lead enrollees to consume more and more expensive drugs, which would lead to higher Medicare spending. Fortunately, this is not the only change the legislation would make.

Second, the proposed legislation would reallocate responsibility for paying for an enrollee's drugs between insurers and taxpayers. Under current law, the insurer pays nothing until the enrollee spends $415 on covered drugs. The insurer then pays 75 percent of the cost until the enrollee reaches $3,820 in total spending. The insurer then pays either 63 percent (generics) or 16.7 percent (brand drugs) up to roughly $8,140 in total spending. (This is again where that weird and temporary "manufacturer pays" fiction makes an appearance.) Above $8,140 in total spending, however, the insurer pays just 15 percent while the taxpayers pick up a whopping 80 percent of the cost. (The enrollee pays the remaining 5 percent, as discussed above.)

The proposal would increase the insurers’ exposure and reduce both the enrollees’ and the taxpayers’ exposure. (See Figure 2.) Insurers would still pay nothing below $415 of drug consumption. They would then pay 75 percent up to $11,155 of total spending. Above that amount, there would be another weird (but this time permanent) price reduction where we pretend the manufacturer is paying 20 percent of the cost. In effect, that’s a 20 percent price reduction, and the proposal would require the insurer to pay 75 percent—and taxpayers just 25 percent—of that reduced price. 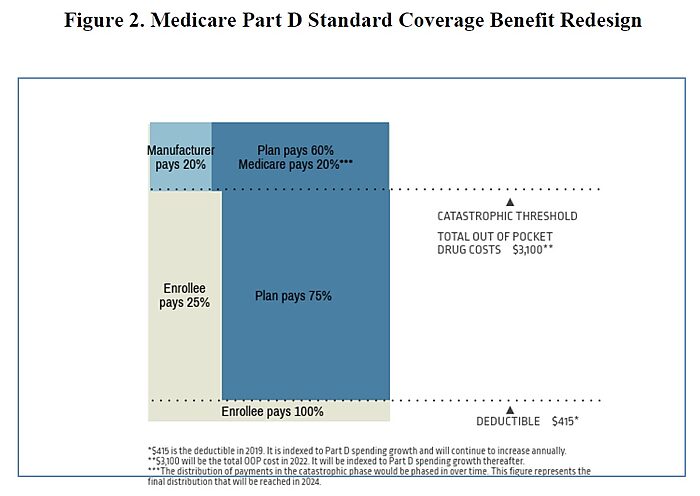 That’s a good thing. When insurers pay a greater share of the cost of drugs above that threshold, they will drive harder bargains with drug manufacturers, and will do more to weed out low-value drug consumption. This change could even offset the incentives to over-consume that come from eliminating enrollee cost-sharing above that threshold. Indeed, the Congressional Budget Office projects that, on balance, this redesign would reduce Medicare spending by $35 billion over 10 years. Just to be sure, however, the Committee should continue to make Part D enrollees responsible for (at least) 5 percent of their catastrophic drug spending.

One final concern with this redesign is that while it would heighten the incentives for insurers to drive harder bargains with drug companies and develop more efficient plan designs, it could also heighten incentives for insurers to make their Part D plans unattractive to the sickest patients. That incentive exists anywhere government prohibits health insurers from pricing insurance according to risk. Evidence from the Affordable Care Act, Medicare Advantage, and Medicare Part D suggest efforts to subsidize plans according to the risk of the enrollees they attract (i.e., risk-adjustment programs) do not eliminate this perverse incentive. If the Part D redesign heightens incentives for plans to discriminate against the sick, it could encourage Medicare enrollees to seek coverage elsewhere, most likely in Medicare Advantage, where Medicare pays private insurers to provide integrated coverage to enrollees.

The second major change the legislation would make to Medicare Part D would be to institute a cap on the total amount of subsidies a participating pharmaceutical company may receive.

Under current law, drug manufacturers can charge Medicare Part D plans whatever prices they want. The only constraints they face are the relatively weak incentives for insurers and enrollees to refuse to pay those high prices. Indeed, for six classes of drugs, federal law effectively requires Part D plans to pay whatever prices the manufacturers set.

Under the legislation, participating drug manufacturers could continue to charge whatever prices they want but they would have to pay the federal government an amount equal to the excess of the increase in a covered drug’s price (specifically, the “wholesale acquisition cost” or WAC) above overall inflation. This requirement would discourage manufacturers from increasing their prices faster than inflation and could thereby reduce Medicare spending. The CBO projects this proposal would reduce Medicare spending by $50 billion over 10 years.

One concern with this “inflation cap” proposal is that drug manufacturers would game this requirement by launching new drugs at (even) higher prices. No doubt they would. Manufacturers are unlikely to get as much money out of taxpayers using this strategy as they do under current law, however. Manufacturers face greater price constraints when they are launching a drug that has zero customers than they face when increasing the price of a drug that has an established (and heavily insured) customer base. Heavily insured consumers tend to rebel when insurers try to impose price discipline on manufacturers by switching their enrollees to a different drug. Enrollees tend to rebel less when an insurer refuses to cover a drug that none of them have ever used. Insurers are therefore in a much better position to drive a hard bargain—i.e., to say no to excessive prices—at launch, when none of their enrollees are using a drug, than they are once their enrollees have begun using that drug. The CBO considered the incentive the “inflation cap” creates to set higher launch prices, yet still projected the proposal would save $50 billion over 10 years.

Fixing Medicare's problems requires strong medicine. It requires, as Overcharged recommends, taking the money Congress would otherwise spend on Medicare and giving it to seniors as a means-tested and risk-adjusted cash payment; and then trusting seniors to spend that money, just as Congress trust them to spend their Social Security checks. Richer and newly cost-conscious seniors would spend that money much more carefully than the current Medicare program does and would finally impose discipline on our out-of-control health sector.

This legislation’s Part D redesign and inflation-cap proposal are not the strong medicine Medicare needs. They are minor tweaks. They are hardly perfect. I would prefer that they not limit enrollee cost-sharing and that they impose an even tighter cap on Part D subsidies to drug manufacturers. But these proposals are steps in the right direction. They would not impose price controls on prescription drugs; they would give insurance companies incentives to drive harder bargains with drug manufacturers, to the benefit of taxpayers. They would not increase taxes on anyone; they would reduce wasteful Medicare spending and the burden of government by a projected $85 billion over 10 years.

The fact that these minor, commonsense tweaks to a bloated entitlement program are encountering strong opposition—again, mostly from those who would not make quite as much money off the taxpayers—illustrates one reason central economic planners, whether in Congress or the Medicare bureaucracy, are not competent to manage health care for 61 million Americans.

*The Cato Institute also published books in 2006 and 2001 about how corrupt Medicare is.