The chart below shows the number of incidents, as reported by the SEC’s Inspector General. What caught my eye was that the number of porn‐​viewing incidents shows a massive spike in 2008, when the financial crisis was at its worst. 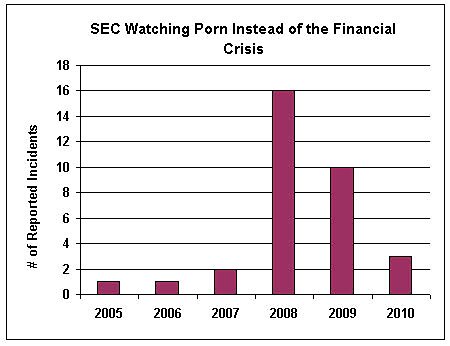 It should, of course, be noted that the overall level of incidents was small in number, so we shouldn’t draw too many conclusions about the SEC overall. We should, however, be concerned at at least one of these employees was being paid $222,418 a year. I might be able to accept someone getting paid $20,000 a year spending their work time watching porn, but not $222,418. But then at least this employee has an excuse for missing the financial crisis; we are still waiting to hear the excuse for the SEC’s non‐​porn viewing employees (perhaps they were too busy on Facebook to keep an eye on Wall Street).