Score One for For‐​Profit Colleges This Veterans Day

There is nothing easier or seemingly more popular in higher education than bashing openly for‐​profit colleges. (I use “openly,” by the way, for a reason.) If you burrow into the demographic and funding weeds, however, you’ll see that proprietary schools are likely no worse, as a whole, than any other sector of uber‐​subsidized higher ed. And now Gallup has produced a little more good news for these beleaguered schools, to the extent that any news from our bloated Ivory Tower is good: For‐​profits seem to do a better job of serving veterans – at least from the vets’ perspective – than public colleges and, depending on how you slice the data, nonprofit private colleges as well.


As the table below shows, when veterans rank how well they feel their schools understood their needs, the percentage giving a 4 or 5 – the top scores – to for‐​profit schools beats any other sector, and at just the 5 level only nonprofit private institutions surpass them. Comparing for‐​profit and public schools, for‐​profits get more 4s and 5s by a 15 percentage point margin. 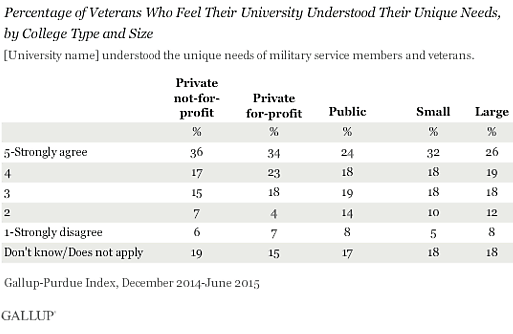 It’s probably not a mystery why this is. For‐​profits are more nimble than public colleges, and their desire for profits may actually – get ready – make them more responsive to the needs of the students who buy their services. Yes, there are bad for‐​profit actors – though the extent to which that is the case is unclear – but maybe on the whole they work better for students than lumbering, impersonal public institutions that get big taxpayer subsidies upfront. At the very least, that’s what this evidence suggests. Not that evidence has mattered much in this debate so far.