AEI's Rick Hess worries that school choice advocates are moving into the public messaging arena with "brazenly manipulative" flicks that rely on shallow "sound bites." He cites the screening of five documentaries at an upcoming national conference in San Franscisco to argue his point. 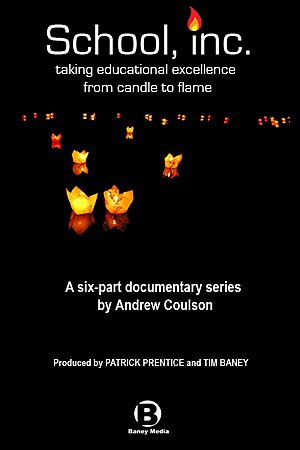 I can't comment on them as a whole--I haven't seen them all--but I would like to point out that there will actually be at least eight screenings at next month's conference. Among them will be a brief sample of a proposed six-part documentary series called School, Inc.  Taking Educational Excellence from Candle to Flame. This series, inspired by James Burke's Connections and Carl Sagan's Cosmos, would take viewers on a world-wide quest to answer one very important question: why is excellence routinely replicated and spread on a massive scale in every field except education?

The series hasn't been shot yet, and perhaps distributors today won't think viewers are still interested in the kind of challenging, thought-provoking documentary series that so captivated me (and millions of others) in my teen years. But the project's advisory board includes Jay Mathews, Paul Peterson, James Tooley, and Michael Horn, my co-producers and co-writers (Patrick Prentice and Tim Baney) have more than half-a-century of documentary filmmaking experience between them, and I've been studying school systems around the globe and across history for the better part of two decades. We're confident that this series will be both substantive and entertaining, and think that American (and foreign) audiences are very interested in the subject matter. As we start to pitch to distributors in the coming months, we'll find out if they agree.