Savings and the Decline of Small Business Entry

A recent paper from the Brookings Institute raises an important observation that businesses are “becoming older,” that is, the age profile of American business is increasingly dominated by older firms. One reason is that the entry rate of new businesses has been steadily declining for decades.


While this decline has been witnessed across firm size, it has been most dramatic among small firms. One potential contributor to the decline in new small businesses is the long run decline in the personal savings rate. According to the Census Bureau’s Survey of Business Owners, the number one, by a long shot, source of capital for new businesses is the personal savings of the owner. For firms with employees, about 72 percent relied upon personal/​family savings for start‐​up capital. The other dominate sources of capital, credit cards and home equity, were much less frequently used. Recent legislative changes (2009 Card Act) and a volatile housing market have made those sources less reliable in recent years.


The chart below compares the trend in entry rates for new business establishments with less than five employees with the personal savings rate. The correlation between the two is 0.62. While both the decline in business entry and savings are likely driven by common macroeconomic factors, it seems plausible that if households have fewer saving, they are also less likely to be able to start a business. My preferred response would be to eliminate policies, such as those in the tax code or current monetary policy, which penalize savings. I suspect others might have different suggestions. 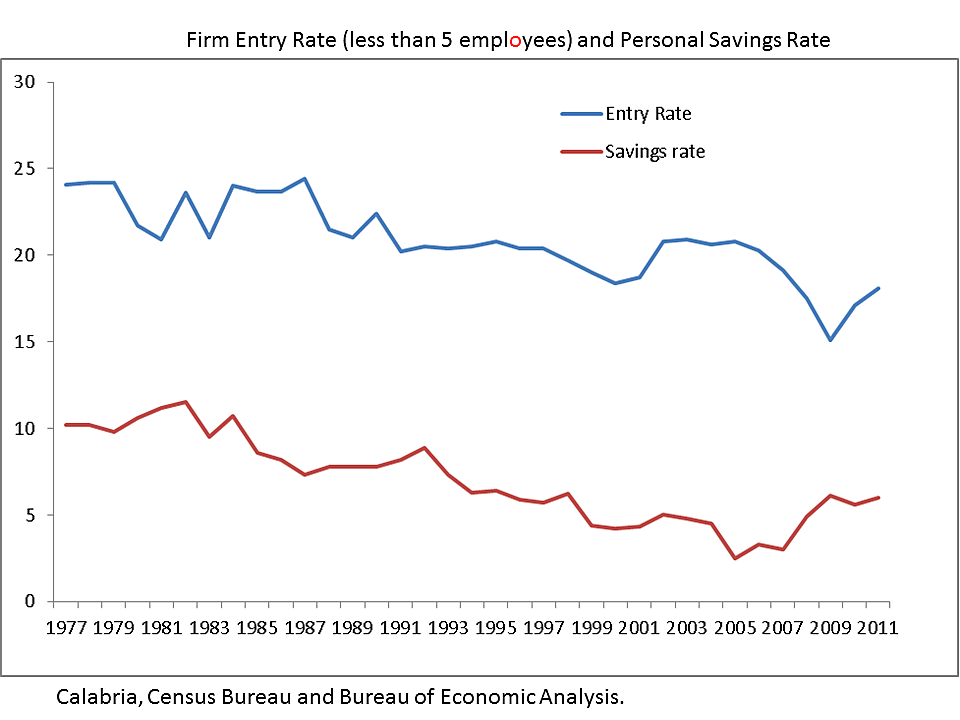