However, Vanessa Brown Calder has explained why government paid leave benefits are not the answer. Family leave is an expense that should be covered by employers voluntarily or by personal savings.


People should plan ahead for life’s contingencies and inevitabilities. Young people should learn to restrain their consumption and save so that they are prepared for costs down the road, including the costs of family leave, unemployment, and retirement.


Unfortunately, the natural inclination to save has been undermined by government. Rising hand‐​outs of all types have reduced the desire to save as well as the ability to save as taxes have risen to pay for the welfare state.


Fortunately, the government hasn’t yet completely killed a belief in personal responsibility and financial prudence.


A new survey by Emily Ekins examined public views about a possible government paid leave program. As an alternative to a new spending scheme, one survey question asked whether people favored tax‐​advantaged savings accounts that could be used for family leave costs. More than three‐​fourths (78%) of Americans approved, with strong support from Democrats, Republicans, men, and women. 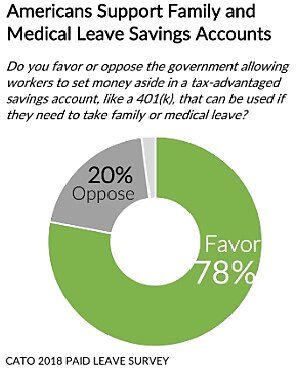 Family leave expenses could be handled by Universal Savings Accounts (USAs), which would be a simple and flexible method for all Americans to save for all types of planned and unplanned expenses. The problem now, as Adam Michel notes, is that federal tax rules tell people, “Don’t bother saving unless you save for retirement.” But all types of personal savings are good, and none would face tax penalties with USAs within annual contribution limits.


As for paid leave proposals, there is a knee‐​jerk tendency in Washington to think that new spending programs are the answer to every challenge that people face. But the goal of public policy should be to wean people off government and remove barriers to self‐​sufficiency. USAs would be one step toward that goal.