On Friday, the New York Times ran an op-ed by University of New Hampshire historian W. Jeffrey Bolster describing the long history of the decline of the stock of cod off the coast of New England.  The article corrects the misperception that the decline is recent or the result of modern industrial fishing methods. 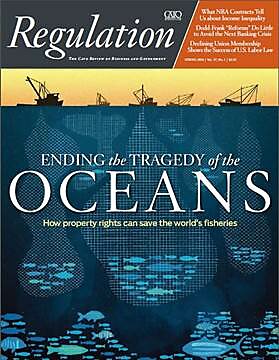 Instead the decline started more than 150 years ago and is the not the result of deliberate action by anyone in particular, but the “system” itself.  By “system” he means the exploitation of an open access resource, in which no one owns the rights to harvest the stock.  In such an environment overfishing is the inevitable result because all have incentive to take as much as they can because others will if you do not.  Thus individual efforts at conservation are irrational.

Unfortunately his essay ends there and does not describe policy innovations that would create a better “system.”  In the Spring issue of Regulation, Jonathan Adler and Nathaniel Stewart argue that the best way to regulate fisheries for sustainable exploitation over long periods of time is a system of individual transferable quotas (ITQs), better known as catch shares.  In ITQ systems, the total allowable catch in a fishery is set by biologists to allow sustainable fishing without degradation of the stock. The rights to particular shares of the total catch are allocated to individuals, who may fish themselves, or sell or rent the rights to others. These systems have been successfully in use in a number of countries for decades.  Implementing them in the New England cod fishery would yield similar results.