Regardless, we decided to do our best in looking at how sanctuary jurisdiction policies affect crime in Florida.  According to the Center for Immigration Studies, Clay and Alachua counties in Florida will not honor ICE detainers without a judicial order or a criminal warrant and their policies were enacted in December 2014 and September 2015, respectively.

To compare whether the adoption of anti-detainer sanctuary policies had an impact on crime in Alachua and Clay Counties, we draw on crime data from the FBI’s Uniform Crime Reports (UCR) Return A file.  The Return A is the gold standard in crime data in the economics and criminal justice literature.  Since these data are provided at the reporting agency level, we aggregate the crime counts up to the county-year level to reflect the extent of geographic coverage for each anti-detainer policy.  As a basis for comparison, we identify counties neighboring Alachua and Clay as counterfactual counties using the county adjacency file from the National Bureau for Economic Research.  We then compute county crime rates per 100,000 to compare crime rates across counties.  For illustrative purposes, we compute an “adjacent counties” counterfactual crime rate as the sum of all crimes in surrounding counties normalized by their combined population.

Change in Crime Rates in Sanctuary Counties and Neighboring Counties 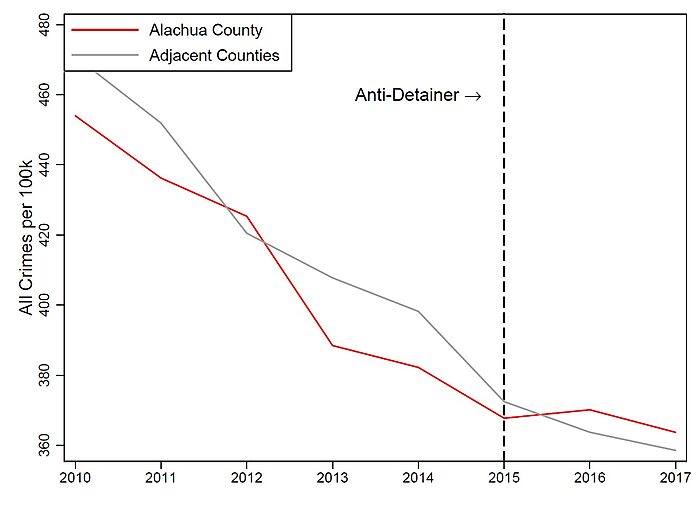 Figure 3 displays the crime rates in Clay County relative to neighboring counties.  The crime rates were roughly parallel before Clay County enacted its sanctuary policy and remained roughly parallel afterward.  Again, it looks as if the enactment of a sanctuary policy in Clay County had no effect on crime.  More time after the enactment of the sanctuary policies and more rigorous statistical methods are required to fully analyze these effects for both Clay and Alachua Counties, but Figures 2 and 3 are convincing on their own.  The results look nearly identical if trends in property or violent crime rates are compared separately. 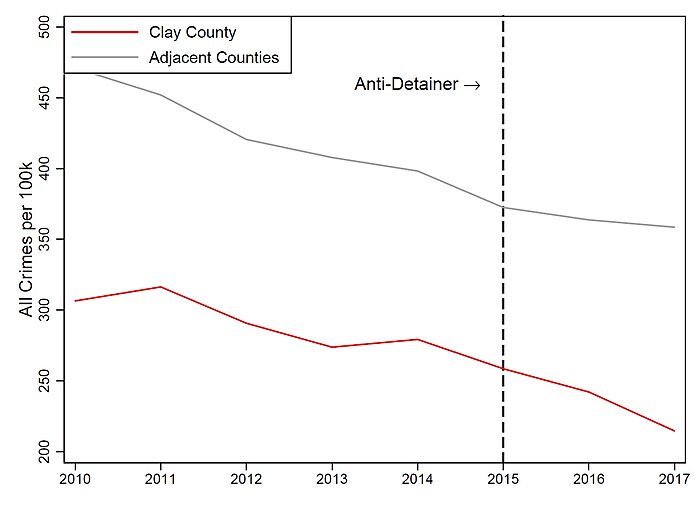 SB 168 was originally paired with a bill that would have mandated E-Verify on the state level.  E-Verify is a government electronic eligibility for employment verification system where employers run the identity information of new hires against government databases to see if they are legally able to work.  The goal of E-Verify is to exclude illegal immigrants from the workforce.  E-Verify doesn’t work well, but it looks to have increased crime in Arizona when that state government mandated it for all new hire.  Although SB 168 will have no effect on crime in Florida, at least the legislature ditched its effort to mandate E-Verify as that may well have increased crime.

Florida currently has only two sanctuary jurisdictions according to the Center for Immigration Studies and is unlikely to have many more in coming years.  Furthermore, crime rates in those counties did not rise relative to neighboring counties after they adopted their sanctuary policies.  The effect of sanctuary policies on local crime rates is a subject screaming for more research, but the evidence so far shows that sanctuary policies don’t affect crime in Florida.