Rise of the Transfer State

Perhaps this is best thought of as the chart of the day, as I will not attempt to discuss its many implications or drivers. The following chart tracks the percentage of federal spending that is simply a direct transfer of income. Now we could debate whether all government spending is little more than a transfer of wealth, but let’s save that for another day. The chart shows a dramatic increase in the share of government that does not go to buying or producing anything, but simply takes the form of a check, increasing from around a third of federal spending to about two‐​thirds today. 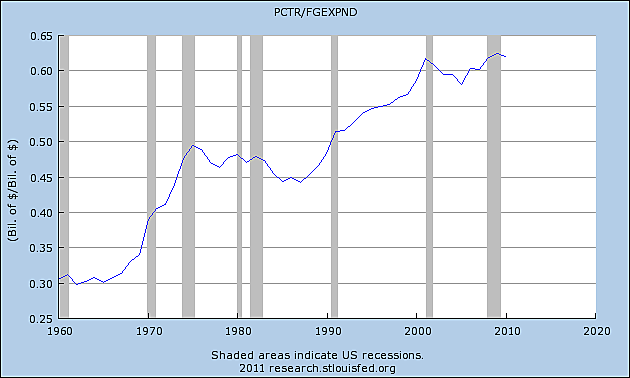 There is one aspect of this trend which merits study in our current economic environment. While there is a wide range of estimates* for how much government spending adds (or subtracts from) overall economic activity — the so called “fiscal multiplier” — that multiplier is likely to differ for transfer payments versus the government purchase of goods and services. If government simply takes from A and gives to B, then the magnitude and sign (- or +) will depend on A’s marginal propensity to consume relatives to B’s, minus any resources A spends to avoid said transfer. This suggests to me that the multiplier for transfers is likely to be about zero, if not negative. Some of that transfer will be saved by the receiving party, while consumption will likely decline by the losing party.

With direct government purchases of good and services, little, if any, of the initial spending will be saved. Hence it seems reasonable to believe that the multilpier for direct spending is higher than than for transfer payments, although it still may be less than one.


The point of all this is that the shift of federal spending towards transfer spending has likely reduced the fiscal multiplier, all else equal. As this is an empirical question, I would certainly be interested in knowing if anyone has tried to measure it.


* for an overview of current Keynesian thinking on the fiscal multiplier see Michael Woodford’s recent piece in the AEA Journal Macroeconomics.