The good news is that 3 schools have been removed from the tracker, bringing closures down from 118 to 115.

On September 1 it was announced that the Crotched Mountain School in New Hampshire, which serves students with disabilities, was revived after being acquired by an organization called Gersh Autism. After hearing that news we reviewed the tracker and found two more schools had been saved. At the end of August it was reported that Saint Joseph High School in New Jersey was rescued by a fundraising effort of families, alumni, and others, though it will re‐​open under a slightly different name: Saint Joseph Academy. We also discovered that in May Seneca Academy in Maryland was saved by parent fundraising and a partnership with Georgetown Hill, which runs several schools.

Reopenings, and a dearth of closures throughout much of July and August, suggest that private schools are faring much better than many feared as lockdowns prevailed in March and April. It is even possible private schools are gaining students as parents seek options, especially in‐​person instruction, that many public schools are not providing. Or maybe not.

As discussed recently, estimates of private school enrollment under COVID vary widely. Yesterday new data came out, pointing toward small but negative enrollment movement. Based on questions asked in mid‐​August – yes, a virtual lifetime ago given rapidly changing schooling decisions – EdChoice found that 21 percent of children attended private schools right before COVID-19, but only 19 percent will do so this school year. Most of the movement is toward homeschooling. Indeed, homeschooling appears to be the big winner in the survey, moving from 11 percent of students to 14 percent, while traditional public schools and private schools drop and charters stay steady. 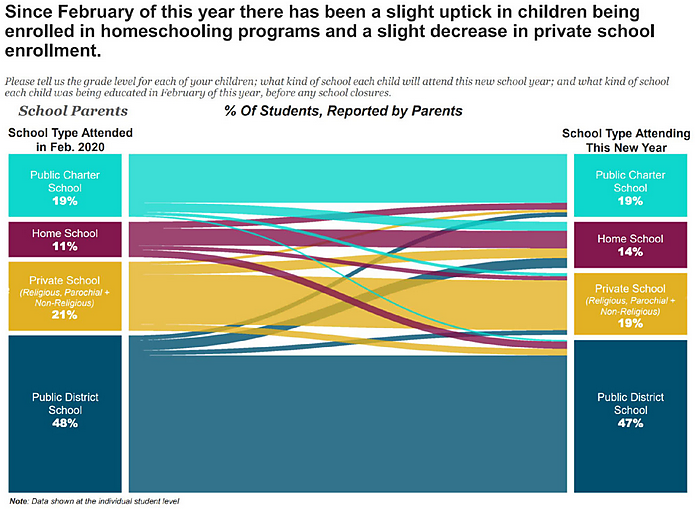 Some provisos are in order. First, it is reasonable to suspect that some kids may be getting institutional schooling online but their parents have reported it as homeschooling. Second, home, private, and charter schoolers appear over‐​represented, and traditional publics under, compared to federal data, raising questions about the sample. Finally, the parent sample is relatively small, creating an appreciable margin for error.