Republican Tax Law: Across the Board Cuts

Americans are scrambling to file their 2018 federal income tax returns. The good news is that most folks should be left with more cash this year after Uncle Sam’s greedy grab than in past years.


The 2017 Republican Tax Cuts and Jobs Act slashed taxes across the board, with about 90 percent of tax‐​paying households receiving a cut. The individual tax cuts will be in place from 2018 to 2025, at which point Congress will decide whether to extend them. If Americans want to retain their tax cuts, they need to pressure Congress to restrain spending.


The Joint Tax Committee—the tax scorekeeper of Congress—released the table below showing the effects of the tax cuts in 2019. In the confusing way they’ve labelled it, “present law” is the law before the cuts and “proposal” is with the cuts. Also note that the law cut income taxes, but the table includes income taxes, payroll taxes, and excise taxes.


The GOP law cut taxes for every income group. The largest percentage benefits went to households with incomes between $20,000 and $50,000. House Speaker Nancy Pelosi has repeatedly called the law a “tax scam for the rich,” but she is quite wrong. The law made our highly progressive tax code a bit more progressive. 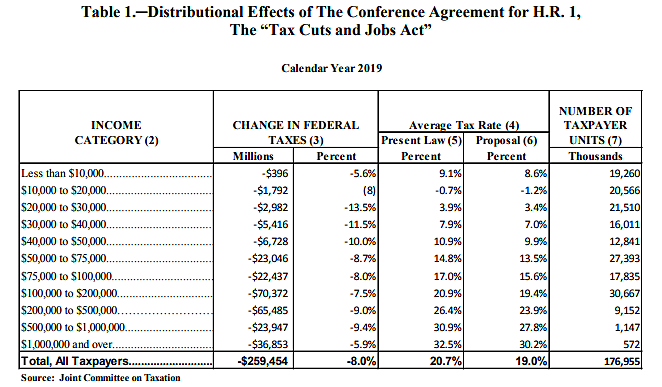