A top agenda item for the incoming House Republicans is to immediately start cutting spending. The GOP promised to reduce “nondefense” (or alternatively “nonsecurity”) spending for 2011 to the 2008 level, representing a $100 billion cut. GOP leaders are now being accused of backsliding on that promise, so let’s take a look at the numbers.


The idea is to reduce fiscal 2011 “budget authority” to the level it was in fiscal 2008. The chart shows the growth in nondefense budget authority since 2000. The spike in 2009 is from $265 billion in discretionary spending authorized in the “stimulus” bill. 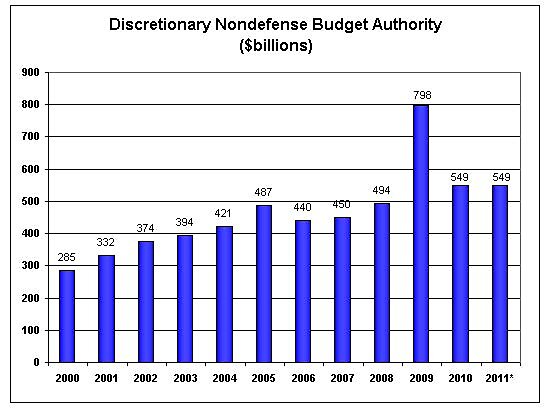 Congress currently has a “continuing resolution” in place that keeps 2011 spending at about the same level as 2010, as shown in the chart. Thus, the House GOP will need to cut spending for the remainder of this fiscal year by about $55 billion to hit the 2008 level. That is less than $100 billion, but the higher cut number was based on proposed spending by Obama for 2011 that wasn’t enacted.


The important thing is that Congress needs to start cutting all types of spending right away. We face a fiscal emergency as debt is exploding, and there are many federal spending activities that are damaging to society and the economy. The GOP should cut defense and entitlement spending as well, but nondefense discretionary cuts are a good place to start.


In considering cuts, note that about $136 billion in nondefense discretionary “stimulus” bill money is still sloshing through the government in 2011 and beyond, so spending cuts (unfortunately) won’t starve the bureaucracies as much as liberals might fear.


The chart puts proposed spending cuts in context. House GOP leaders now admit that they spent too much during the past decade, and indeed the chart shows that nondefense discretionary spending jumped $264 billion over the last decade. Much of the increase came when the GOP controlled the House, Senate, and White House, so now is the GOP’s chance to start reversing out those Bush‐​era increases.