The United States is more socialistic than other advanced economies in numerous ways. Federal and state governments attempt to run businesses that have been privatized in other countries, such as electric utilities, airports, air traffic control, postal services, and passenger rail.


The federal government took over passenger rail after it helped ruin private passenger rail with taxes, regulations, and unions in the post‐​WWII years. Remaining passenger rail routes were assembled into Amtrak in the 1970s, which was supposed to become self‐​supporting but has consumed billions of dollars in subsidies.


Today, Amtrak operates 44 routes on 21,000 miles of track in 46 states. The few routes that earn returns are in the Northeast and the biggest money losers are the long‐​distance routes.

Mr. Anderson, 64 years old, didn’t shrink from many fights in his years running Delta and Northwest Airlines. And after two years of a sometimes uncomfortable overhaul, he is unapologetic about his efforts to force Amtrak to change. Among the most contentious proposals is altering or eliminating some of the network’s venerable long‐​distance train routes in favor of more frequent service where the population is growing.


… Amtrak, Mr. Anderson says, is now on the verge of doing something once thought impossible: breaking even on running its trains. Its annual adjusted operating loss, which excludes capital expenditures and some other costs, will fall to zero over the next year, which would be a first in its nearly 50‐​year history. The railroad projects a 900,000-person increase in ridership this year, to more than 32.6 million trips.


Amtrak says it is profitable on the Northeast Corridor between Washington and Boston, where adjusted earnings were $524.1 million in fiscal 2018, including $318.8 million from the Acela express train. But the company lost more than $540 million on its 15 long‐​distance trains, which cover routes of 750 miles or more.


Congress, however, is enamored with storied old train routes Mr. Anderson wants to break up and wary of some of his other methods. And there are plenty of signs lawmakers want to curb his ambitions.

As Anderson is discovering, congressional resistance to change is a big obstacle to running a business within the government. The solution is to privatize Amtrak and let the restructured company build on Anderson’s reforms with further cost‐​cutting and quality improvements. A private rail company could make operating and investment decisions based on market demands not pork‐​barrel politics. It would be able to close the routes losing the most money and shift resources to routes that service the most customers.


Passenger rail competes against automobiles and airlines. Congress should unleash rail’s potential by selling off Amtrak and giving it the flexibility it needs to cut costs and innovate. 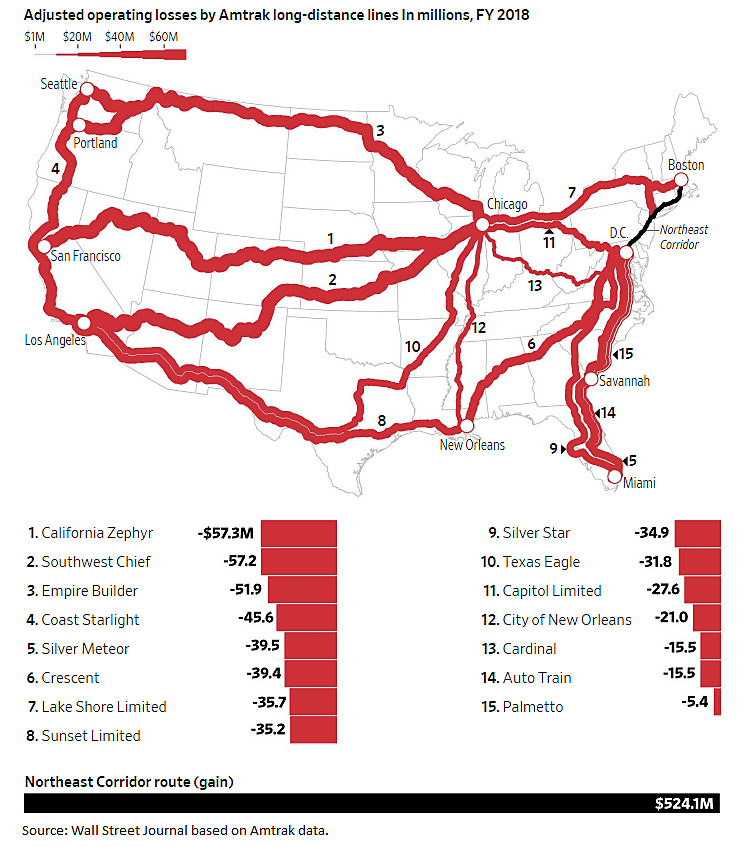