Congress has created an ongoing crisis in the Highway Trust Fund (HTF). Year after year, policymakers spend more on highway and transit aid to the states than the HTF raises from gas taxes and other dedicated revenues. CBO projects that annual HTF spending will be $53 billion and rising in coming years, while HTF revenues will be $40 billion. That leaves an annual funding gap of at least $13 billion.

Congress faces a deadline at the end of May to reauthorize the HTF. However, Congress will probably enact a short-term HTF extension, and then grapple with the funding gap problem later in the summer. Everyone agrees that Congress should find a long-term solution to the funding gap.

The best solution for the HTF is simple: cut annual spending by $13 billion to match revenues. State and local governments are fully capable of funding more of their own highway and transit expenses. Congress can help the states by reducing federal regulations that boost transportation construction costs, such as Davis-Bacon and environmental rules.

Cutting federal aid for highways and urban transit would improve the efficiency of infrastructure investment. Ending transit aid would be particularly beneficial. Local officials often focus on maximizing the flow of money from Washington, rather than ensuring that projects generate overall net value. By injecting federal dollars and regulations into local transit planning, Congress distorts local decision making and increases the complexity, bureaucracy, and costs of projects.

Cutting HTF spending by $13 billion would be a substantial reform, but a reasonable one given the rise in HTF spending over the years. The chart below shows HTF spending since 1970 in real, or inflation-adjusted, dollars. The Interstate Highway System was essentially complete by the early 1990s, so you might think that federal spending would have fallen after that. Instead, spending ballooned between the mid-1990s and mid-2000s, and it has remained at an elevated level ever since. (HTF data here and here. I used the CPI to convert to 2015 dollars).

In sum, cutting spending by $13 billion would be a good way to close the HTF funding gap. It would bring real spending down to the more reasonable levels of the late Clinton years. And it would encourage the states to make more efficient investment decisions to meet their diverse transportation needs. 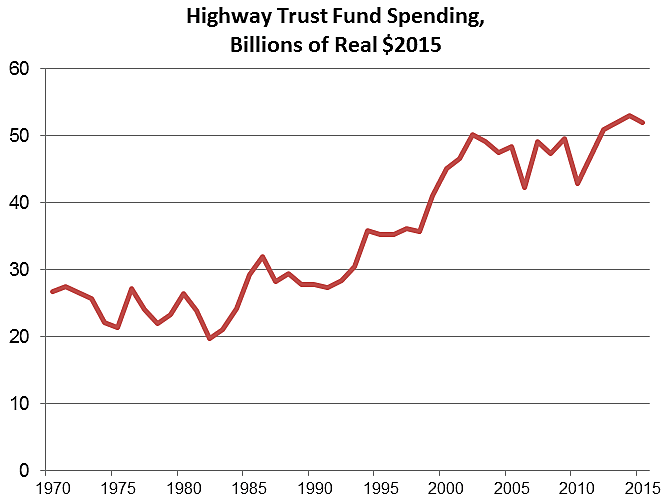 For more on infrastructure reforms, see here and here.