Who said public schooling is all about the adults in the system and not the kids? Everyone knows it’s even more basic than that: Public schooling is a jobs program, pure and simple. At least, that’s what one can’t help but conclude as our little “stimulus” turns one‐​year old today.


Throwing almost $100 billion at education sure as heck ought to have kept teachers in their jobs, and the unemployment numbers suggest teachers have had a pretty good deal relative to the folks paying their salaries. While unemployment in “educational services” – which consists predominantly of teachers, but also includes other education‐​related occupations — hasn’t returned to its recent, April 2008 low of 2.2 percent, in January 2010 it was well below the national 9.7 percent rate, sitting at 5.9 percent.


Of course, retaining all of these teachers might be of value to taxpayers if having so many of them had a positive impact on educational outcomes. But looking at decades of achievement data one can’t help but conclude that keeping teacher jobs at all costs truly isn’t about the kids, but the adults either employed in education, or trying to get the votes of those employed in education. As the following chart makes clear, we have added teachers in droves for decades without improving ultimate achievement at all: 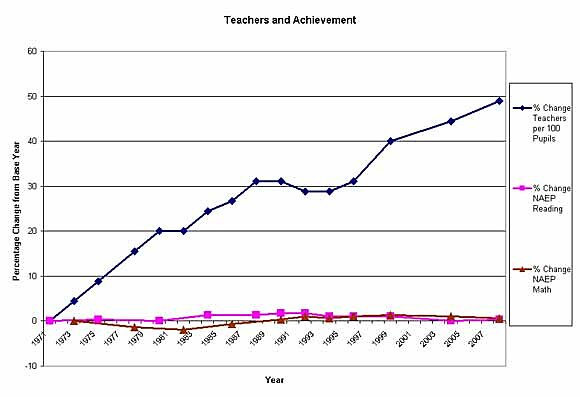 
Since the early 1970s, achievement scores for 17‐​year‐​olds — our schools’ “final products” — haven’t improved one bit, while the number of teachers per 100 students is almost 50 percent greater. If anything, then, we have far too many teachers, and would do taxpayers, and the economy, a great service by letting some of them go. Citizens could then keep more of their money and invest in private, truly economy‐​growing ventures. But no, we’re supposed to celebrate the endless continuation of debilitating economic – and educational — waste.


You’ll have to pardon me for not considering this an accomplishment I should cheer about.