Christina Hoag of the AP writes that LA takes the prize for conspicuous public consumption with the Robert F. Kennedy Community Schools:

With an eye‐​popping price tag of $578 million, it will mark the inauguration of the nation’s most expensive public school ever. The K-12 complex to house 4,200 students has raised eyebrows across the country as the creme de la creme of “Taj Mahal” schools, $100 million‐​plus campuses boasting both architectural panache and deluxe amenities.

Gone are the days when great emperors gave expression to love and grief in spires and domes of white marble. No longer do poor parishioners and wealthy kings construct cathedrals of awe and glory.


Today, we build monuments to government schooling; vast money‐​pit monstrosities made of matte aluminum flashing and a bureaucrat‐​chic modern aesthetic.


Indeed, an impressively expensive environment that is completely unrelated to student achievement. Students only need good lighting, ventilation and protection from the elements to learn. Now we have massive buildings and mini Olympic villages with aquatic centers and professional‐​grade sports fields. It’s no wonder LA budgeted close to $30,000 per student in 2008.


All of this overbuilding has upfront and long‐​term costs. Big, expensive and complicated facilities cost more to run and maintain, and the bonds that fund much of this spending leave taxpayers strapped with an increasingly heavy debt burden.


These modern Taj Mahal Schools seem to be a nation‐​wide phenomenon. National Center for Education Statistics data show that spending on facilities and construction has been increasing at a much faster pace than it has for classroom instruction. 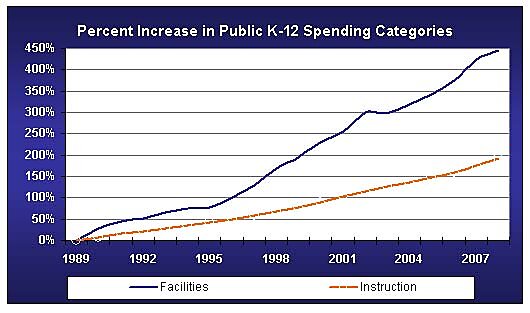 From 1989 to 2008 spending on facilities acquisition and construction has increased a stunning 445% while instructional spending increased 198 percent. The number of students, meanwhile, increased just 7 percent.


Not only is government education spending out of control, much of the increase is being sunk into hugely expensive and unnecessary building projects.


We need to put more money in the hands of parents and taxpayers. We need to invest more effectively and efficiently with education tax credits.