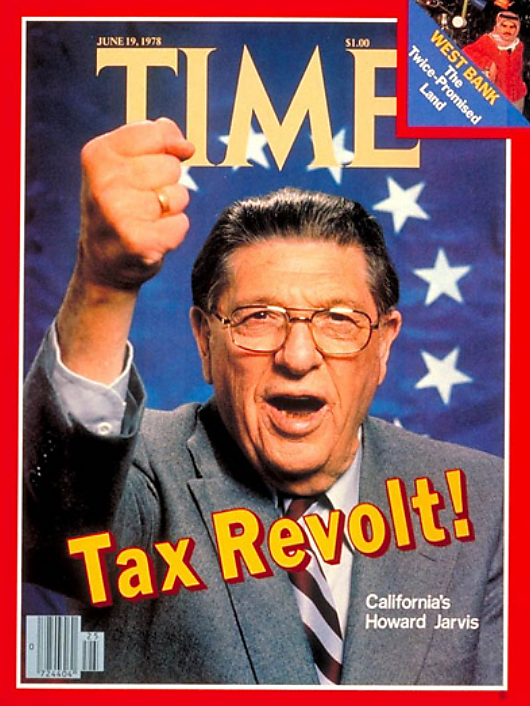 The most famous ballot question on fiscal policy is California’s Proposition 13 passed in 1978. Voters passed the constitutional change to limit property taxes statewide by a large margin, 65 percent to 35 percent.

Howard Jarvis led the drive for Proposition 13 and made the cover of Time magazine, as shown. California property taxes are generally capped at one percent of purchase price plus an annual inflation factor. The large margin for Proposition 13 passage was impressive given that only some voters are property owners while many are renters.

This year Californians will decide whether to partly scrap the property tax limit. Proposition 15 would repeal the cap for commercial and industrial properties to raise taxes by up to $12 billion a year. These properties would be assessed at market value, not purchase price.

The teacher unions are the main funders of the campaign to pass Proposition 15. But Mark Zuckerberg and his wife, Priscilla Chan, have also contributed $7.1 million. The tax‐​hike side has substantially out‐​raised the opposition side of the ballot campaign.

My intern, Hunter Brazal, helped me tally statewide votes on tax issues over the past decade from Ballotpedia. We found that voters supported the anti‐​tax side on 60 percent of income tax measures and 76 percent of sales and excise tax measures.

What about property taxes? We found 72 statewide property tax measures on the Ballotpedia list, many of which were narrow tax cuts for specific groups. Voters supported the low‐​tax side 81 percent of the time. We don’t know how complete the Ballotpedia data is, so our results can be considered a sampling of the universe of statewide tax votes.

Will Californians defend their wallets against the teacher unions? Is the fiscal conservativism that fueled the 1978 tax revolt still alive or has it waned as state politics have moved left? Polls indicate that Proposition 13 continues to be popular, but support for hiking taxes on commercial and industrial properties has grown. Californians will deliver their verdict on November 3.

For background, see this Cato study on Proposition 13 and other state budget limits.