Average private sector wages in the United States rose 3.1 percent in 2010, slightly more than the 2.5 percent increase in average wages of federal civilian government workers. The growth in federal wages was the slowest in at least two decades, and it coincided with a rebound in private wages after the recession, according to new Bureau of Economic Analysis data (see Table 6.6D).

The BEA provides average wage data for dozens of separate industry groups. The data reveal that the federal government has had some of the largest wage increases of any industry. Figure 2 shows the 10 U.S. industries that had the fastest-growing wages between 2000 and 2010. 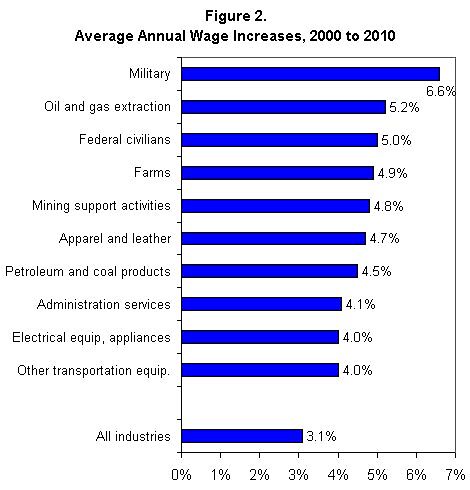 Military employees had the largest average annual wage growth in the nation, at 6.6 percent, followed by workers in the oil and gas extraction industry at 5.2 percent. Federal civilian workers had the third fastest wage growth, at 5.0 percent. Those growth rates compared to the average annual increase of 3.1 percent in all U.S.wages since 2000.

Note that farm wages rose rapidly over the past decade. That fact should be considered the next time Congress tackles farm subsidy legislation.

The data presented here do not include employee benefits, such as health and retirement benefits, which comprise an area of compensation where federal workers do particularly well. For a further discussion on the generosity of federal wages and benefits see this article.