Principal of the United States Returns 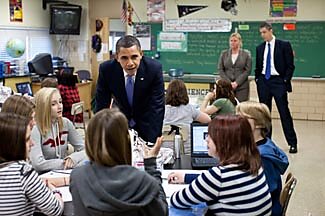 Today the POTUS — in this case, Principal of the United States — will give his third annual, national back‐​to‐​school speech, to be televised live by MSNBC. The immediate target, of course, is the kids, but I doubt it would be viewed negatively by the President if lots of adults saw or heard the speech and thought, “Wow, this guy really cares about kids. I really like him.” And who knows, maybe footage of inspiring the children will make it into a campaign ad or two.


The speech itself, from what appears to be the early‐​release transcript, does seem to focus mainly on encouraging the kiddos. At least there’s that. But it also has some nice self‐ and special‐​interest‐​serving bits:

You’ve also got people all across this country – including me – working on your behalf. We’re taking every step we can to ensure that you’re getting an educational system that’s worthy of your potential. We’re working to make sure that you have the most up‐​to‐​date schools with the latest tools for learning. We’re making sure that our country’s colleges and universities are affordable and accessible. And we’re working to get the best teachers into your classrooms, so they can prepare you for college and a future career.


Now, teachers are the men and women who might be working harder than anybody. Whether you go to a big school or a small one, whether you attend a public, private, or charter school – your teachers are giving up their weekends and waking up at dawn. They’re cramming their days full of classes and extra‐​curriculars. Then they’re going home, eating some dinner, and staying up past midnight to grade your papers.


And they don’t do it for a fancy office or a big salary. They do it for you. They live for those moments when something clicks, when you amaze them with your intellect and they see the kind of person you can become. They know that you’ll be the citizens and leaders who take us into tomorrow. They know that you’re the future.

Probably the only big question stemming from this speech is why so little hubbub about it? In 2009 it was huge news. Today — almost nothing.


Certainly one thing is this year, unlike 2009, the Department of Education didn’t put out ham‐​fisted, potentially politicized teaching guides to go with the speech. And clearly the President’s supporters no longer have the same ardor they did in his early, far less bruised days. And it seems the White House just isn’t publicizing this address very much, maybe to avoid revisiting past acrimony, or maybe just to seem less intrusive in all aspects of American life than he did in 2009.


Or maybe it’s this: Like all unprecedented federal intrusions, once the precedent is set Americans just get used to it. And there are always new threats to battle, right? Meanwhile, freedom is eroded just a little bit more.


Now there’s a topic I’d like to see the Principal of the United States address.