President Obama has issued his final federal budget, which includes his proposed spending for 2017. With this data, we can compare spending growth over eight years under Obama to spending growth under past presidents.

Figures 1 and 2 show annual average real (inflation-adjusted) spending growth during presidential terms back to Eisenhower. The data comes from Table 6.1 here, but I made two adjustments, as discussed below.

Figure 1 shows total federal outlays. Ike is negative because defense spending fell at the end of the Korean War. LBJ is the big-spending champ. He increased spending enormously on both guns and butter, as did fellow Texan George W. Bush. Bush II was the biggest spender since LBJ. As for Obama, he comes out as the most frugal president since Ike, based on this metric.

Figure 2 shows total outlays other than defense. Recent presidents have presided over lower spending growth than past presidents. Nixon still stands as the biggest spender since FDR, and the mid-20th century was a horror show of big spenders in general. The Bush II and Obama years have been awful for limited government, but the LBJ-Nixon tag team was a nightmare—not just for rapid spending during their tenures, but also for the creation of many spending and regulatory programs that still haunt us today. 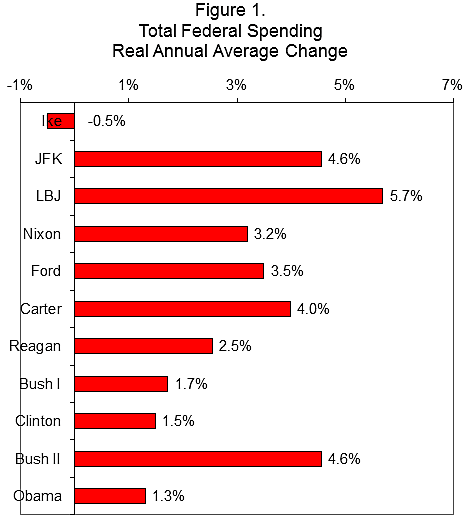 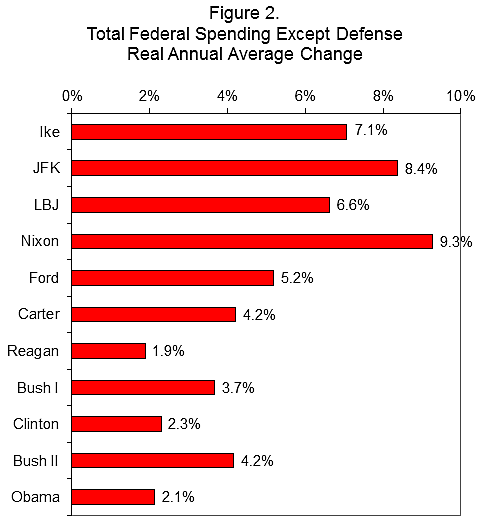 I made two adjustments to the official budget data, both for 2009. First, the official data includes an outlay of $151 billion for TARP in 2009 (page 4 here). But TARP ended up costing taxpayers virtually nothing, and official budget data reverses out the spending in later years. So I’ve subtracted $151 billion from the official 2009 amount. Second, 2009 is the last budget year for Bush II, but 2009 was extraordinary because Obama signed into law a giant spending (stimulus) bill, which included large outlays immediately in 2009. It is not fair to blame Bush II for that (misguided) spending, so I’ve subtracted $114 billion in stimulus spending for that year, per official estimates.

Readers will note that Congress is supposed to have the “power of the purse,” not presidents. But I think that the veto gives presidents and congresses roughly equal budget power today. So Figures 1 and 2 can be interpreted as spending growth during each president’s tenure, reflecting the fiscal disposition of both the administration and Congress at the time. Spending growth during the Clinton and Obama years, for example, was moderated by Republican congresses that leaned against the larger domestic spending favored by those two presidents.

One more caveat is that presidents have limited year-to-year control over spending that is on auto-pilot. Some presidents luck out with slower growth on such spending, as Obama has with relatively slow growth on Medicare in recent years.

Finally, it is good news that recent spending growth is down from past decades, but economic growth is slower these days, so the government’s share of the economy still expanded during the Bush II and Obama years. Besides, the FDR-to-Carter years bestowed on us a massive federal government that is actively damaging American society, so we should be working to shrink it, not just grow it more slowly.