This week, President Obama called for the hiring of 10,000 new teachers to beef up math and science achievement. Meanwhile, in America, Earth, Sol-System, public school employment has grown 10 times faster than enrollment for 40 years (see chart), while achievement at the end of high school has stagnated in math and declined in science (see other chart).

Either the president is badly misinformed about our education system or he thinks that promising to hire another 10,000 teachers union members is politically advantageous--in which case he would seem to be badly misinformed about the present political climate. Or he lives in an alternate universe in which Kirk and Spock have facial hair and government monopolies are efficient. It's hard to say. 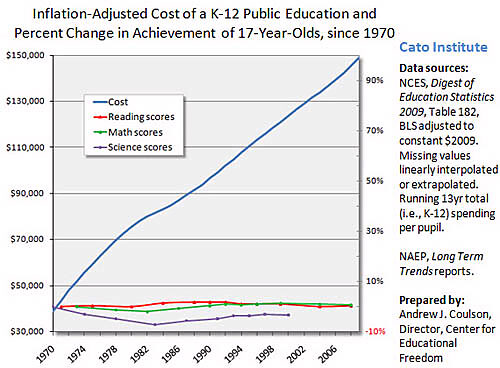