President Trump has waded into the ongoing campus free speech controversy—or should I say “cannonballed” in off the high dive. Though lacking in details for now, Trump promised conservative activists at CPAC in Washington, D.C. that he would soon issue an executive order “requiring colleges and universities to support free speech if they want federal research dollars.”

Though debate rages over the nature and extent of the problem—after all, higher education is a vast and complex domain—it must be said that Trump’s objective is highly defensible. Who except would‐​be censors and narrow‐​minded political activists thinks free speech is not vital to higher education and the country? And fair minded observers agree that free speech is at least embattled in many institutions, if not in worse shape at others. So who can argue against Trump’s promise?

Alas, my experience in free speech politics and higher education informs my concern that Trump’s end does not justify his means for at least two reasons. First, do we really need yet another executive order to deal with a problem that is already being addressed by many concerned citizens? We the People and our legislative representatives have kicked too many problems over to the executive/​administrative branch of government to solve, weakening democratic consensus and self‐​government in the process. Many critics, including me, chided President Obama’s issuance of a unilateral executive order requiring transgender access to every public school bathroom in America. Though not opposed to transgender rights, we thought it best for each school or state to work out its own policy in this delicate area as a matter of principle. Is Trump’s order any different? This is true apart from the constitutional issues implicit in Trump’s statement which require separate consideration once we know the details.

Second, such an order could well backfire. To begin, the Feds often intervene with a jackhammer, unintentionally breaking things in the process. Recall how the expansive application of Title IX in sexual misconduct cases led to the evisceration of due process in campus hearings for many years. Only recently has the pendulum balancing justice for the accuser and the accused begun swinging back toward an appropriate position. As the president of the University of Chicago, perhaps the nation’s leading institution in supporting campus free speech, wrote in response to Trump’s declaration, such intervention “makes the government, with all its power and authority, a party to defining the very nature of discussion on campus.” Such power undermines institutional responsibility and could readily include chilling the voices of those whose politics differ from whatever group or party controls the government at the time.

Such an order could also undermine faculty free speech activists who have worked hard over the years to restore free speech and liberty on campus. If I have learned anything from the campus politics of free speech, it is that the defense of free speech must be non‐​partisan in both substance and appearance. Presidents are partisan, and Trump is certainly no exception. In Wisconsin, state campuses construed the state legislature’s 2017 campus free speech bill as partisan, a perspective only reinforced by other legislative measures that intruded upon university autonomy and challenged the academic freedom of some instructors. Trump’s executive order is hardly guaranteed to be helpful to local free speech activists.

There is a way that the administration could help free speech on campus while avoiding these potential pitfalls. In 2003 the assistant secretary of the Office of Civil Rights in the federal Department of Education wrote a letter to colleges and universities affirming the institutions’ obligation to apply existing harassment law in a manner that does not violate the First Amendment: “I want to assure you in the clearest possible terms that OCR’s regulations are not intended to restrict the exercise of any expressive activities protected under the U.S. Constitution.”

Rather than calling for a sweeping policy dictating how higher education institutions should deal with harassment and speech, the 2003 letter simply reaffirmed what was already obvious: in applying harassment policy, be sure not to confuse protected speech with harassment, leaving the implications to each institution and its litigation concerns. A similar letter by Secretary Betsy DeVos might help campus free speech activists, rather than complicate their cause.

*Donald Downs is is the Alexander Meiklejohn Professor of Political Science Emeritus, and the Affiliate Professor of Law, and Journalism Emeritus at UW‐​Madison. He is currently writing a book on campus free speech for the Cato Institute. 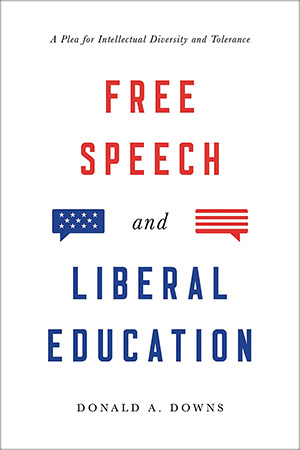