The Trump administration has released its budget for fiscal year 2021. In the face of huge deficits, the budget proposes numerous reforms to discretionary and entitlement spending and foresees the budget eventually balancing by 2035.

On the revenue side, the budget would extend the Trump tax cuts beyond 2025, which would reduce federal revenue growth. But the budget also assumes strong economic growth in the coming years, which the administration projects would help fill federal coffers with rising tax receipts.

The chart below compares spending and revenues in the Trump budget to the latest baseline projections from the Congressional Budget Office. 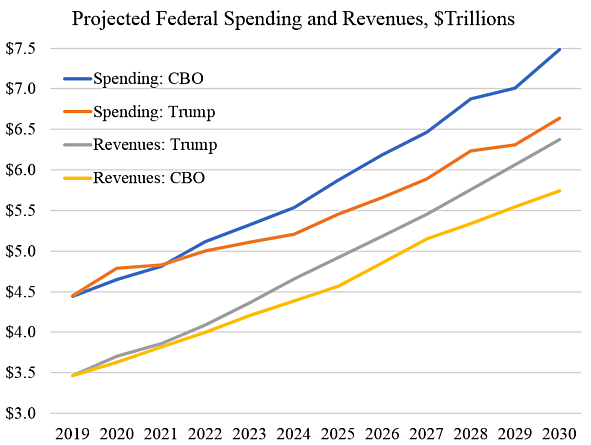 The administration is proposing $4.6 trillion in deficit‐​reduction measures over the next decade. Those changes sound large but would represent just 7 percent of projected federal spending over the next decade of $61 trillion. Most of the Trump cuts make sense, although larger entitlement reforms should be pursued.

Some pundits will say that the Trump spending cuts will hurt the economy, but that narrative is false. Large spending cuts would spur economic growth by leaving more resources in the private sector and allocated by markets. Federal spending causes microeconomic damage that undermines growth.

Facing large deficits in the 1990s, Canada slashed federal spending across‐​the‐​board and the economy boomed. Spending was cut from 22.9 percent of GDP in 1993 to 16.1 percent by 2000 and the economy was launched on a decade of robust growth.

Under the Trump budget, U.S. federal spending would fall from 21.6 percent of GDP this year to 18.4 percent in 2030. The Trump spending reductions would be a good start, but even larger reforms are possible and desirable, as the Canadian experience shows.