That's why it’s useful to look at a president’s spending numbers for the current year and next year, rather than the make-believe numbers for later years in the budget. The chart shows total federal outlays since 2000 and Obama’s estimated spending for 2012 and proposed spending for 2013. Data are for fiscal years. Also, I’ve excluded TARP spending because reestimates of TARP costs distort the data. 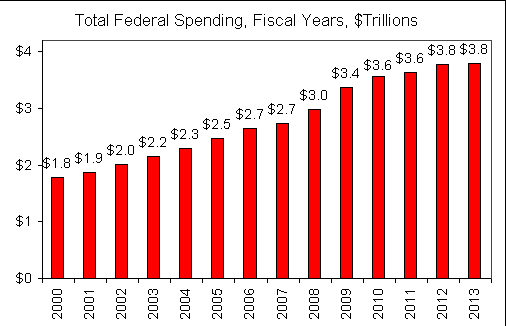 Spending has gone up from $2.98 trillion in 2008—the year before Obama came into office—to a proposed $3.80 trillion in 2013. That is a 28-percent increase in five years, which represents a compound annual growth rate of 5.0 percent. Because the economy has stagnated during this period, spending has increased as a share of GDP.

Similarly, Iraq/Afghanistan war costs peaked at $163 billion in 2010 and are expected to fall to $97 billion by 2013. There have been similar drop offs in spending for recession-related programs such as unemployment insurance.

Thus, as stimulus, war, and recession-related costs are falling by hundreds of billions of dollars, President Obama is using the money to increase spending on other programs. We have run deficits greater than a trillion dollars four years in a row, and yet the president seems oblivious to the need for real spending cuts.

Here's a better fiscal plan, which focuses on ways to cut spending and balance the budget.