President Obama has released his budget for fiscal year 2017. The president’s spending and revenue proposals will be mainly dead on arrival on Capitol Hill, including his $3 trillion in proposed tax hikes.


So it is more interesting to look at the budget baseline, which presents projections assuming no changes in law going forward. Since Obama’s proposals will go nowhere in Congress, the baseline gives us a better picture of what the next president will face when he or she comes into office next year.


If you stacked $24 trillion in $100 bills in a pile, it would stretch 16,000 miles high, or about the height of 150,000 Washington Monuments. Government debt—driven by deficit spending—is by far Washington’s largest monument.


Where is all the spending going? The chart below shows federal outlays divided into four pots, as a share of gross domestic product (GDP) from 1970 through to 2026, with projections under the baseline. The chart reveals that entitlement spending—driven by rapid growth in Social Security and health programs—will increasingly dominate the budget in coming years.


I suspect that entitlement spending will also dominate the next president’s tenure in office as it drives up debt to unprecedented and dangerous levels, although you wouldn’t know that from the campaign trail so far this year. 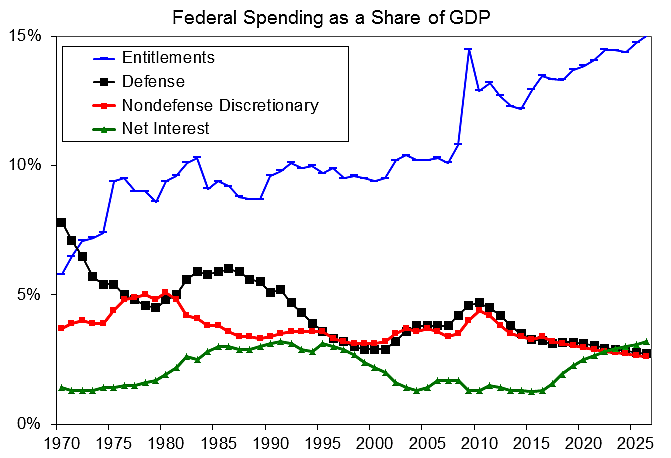