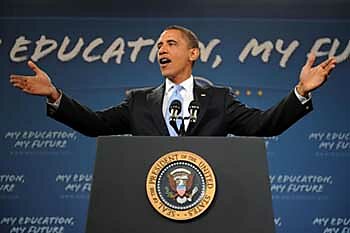 Remember back in September, the huge hullabaloo over President Obama’s planned address to America’s students to start the new school year? Remember how concerned many people were that the speech would be heavily politicized, and perhaps even designed to “indoctrinate” kids about the President’s views on such controversial issues as health‐​care reform? You probably don’t remember because the media buried it and the speech ended up being fairly innocuous, but do you recall that the uproar was largely a result of U.S. Department of Education lesson plans that advised teachers to have kids talk about how they could help President Obama, and a cover letter from Education Secretary Arne Duncan that noted that schools are engines of “social progress”? Well it turns out that alarmed parents and taxpayers might have had very good reason to be concerned: In the pages of the most recent Parade magazine, the President furnishes just the sort of politics and social‐​change laden message to students that lots of parents and taxpayers feared.


The President begins his Parade address by expressing his regret that he “couldn’t be at every high school and college commencement this year.” This might seem uncontroversial, but it actually raises one of the most fundamental problems with any president forcing himself into a child’s schooling: Under the Constitution, the federal government has no authority to interfere in education. With this president especially, though, it appears that among the ever‐​growing titles accompanying the presidency is now Principal‐​in‐​Chief. But that is most definitely not a legitimate presidential title, and at the very least taking it ensures that education — even if unintended — will constantly be wrapped up in White House level politics. So when kids should be sitting in their classes learning, they’ll be increasingly swept up in national political storms, just as happened last September.


Unfortunately, with President Obama’s address in Parade, we see exactly why people of all political stripes should demand that the president stay out of their kids’ classrooms: the president very well might push political and social ideas on their kids that they find unacceptable. In the case of President Obama, he has chosen to push his not‐​so‐​subtle campaign against Americans who dare to to earn profits — charlatans who try to produce things that others want and need, and earn a living through voluntary exchange — and to continue to elevate to sainthood those who work for nonprofits and, of course, government. Oh, and he throws a bit of alternative‐​energy environmentalism in there, too:

Of course, each of you has the right to take your diploma and seek the quickest path to the biggest paycheck or the highest title possible. But remember: You can choose to broaden your concerns to include your fellow citizens and country instead. By tying your ambitions to America’s, you’ll hitch your wagon to a cause larger than yourself. You can choose a career in public service or the nonprofit sector, or teach in an underserved school. If you have medical training, you can work in an understaffed clinic. Love science? You can discover new sources of clean energy or launch a business that makes the most efficient and affordable solar panels or wind turbines.

That their kids would be subjected to this sort of politicized, collectivist rhetoric from the president is exactly what numerous parents — many of whom pursue the filthy paychecks that come with manufacturing computers, building houses, keeping a company’s books, editing magazines, and myriad other things that make all Americans’ lives richer — feared in September. And it might very well be what they would have gotten had there not been a public furor well before Obama’s speech was delivered.


Perhaps, though, we owe the President a debt of gratitude for his insatiable desire to interject himself into our children’s education. Thanks to both the uproar created by his September address, and the objectionable content of his Parade message, the President has provided two terrific illustrations of why the federal government should get out of education. He has also illustrated why overall we need to take education away from politicians and let parents freely choose among private educational options. In short, he has unwittingly cast a bright light on a huge reason we need full educational freedom: Without it, our children will at best be embroiled in repeated political conflict, and at worst truly face political indoctrination.