According to the Washington Post, "President Obama will propose a major increase in funding for elementary and secondary education for the coming year in Wednesday's State of the Union address." This, "senior White House aides said... fits into a broader effort by the administration to focus scarce resources on the nation's long-term economic health."

Give kids a better education and they'll be more successful when they ultimately enter the workforce. Sounds plausible enough. And if you dig into the scholarly research you find that, lo and behold, it's actually true. Nations that improve student achievement the most end up with faster economic growth.

But that leaves us with one important question: does higher government education spending raise academic achievement? At the risk of stepping on Ross Perot's toes, let's pull out the charts.

The first chart, below, shows the relationship between federal spending (adjusted for inflation) and the academic achievement of 17-year-olds since 1970. [The final years of high school are the decisive ones in this case, because we want to know how well our k-12 system has prepared kids for college and the workforce.] 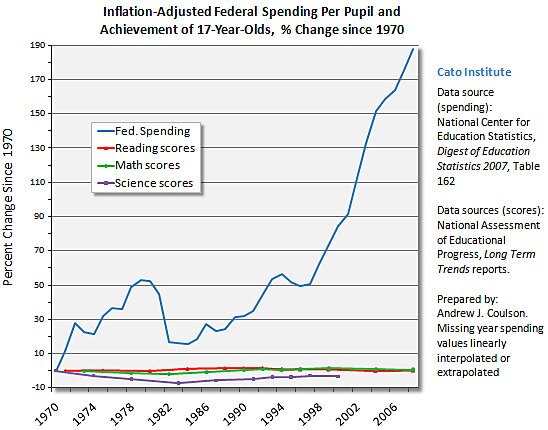 At first blush, there doesn't seem to be much of a relationship between federal spending and student achievement--and so it looks like President Obama is barking up the wrong tree from a policy standpoint. But what if state and local education spending have been falling just as federal spending has been rising, nullifying its effects? After all, we read every day in the newspaper about how public schools are starved for funds. So our next  chart tooks at total expenditures per pupil and student achievement: 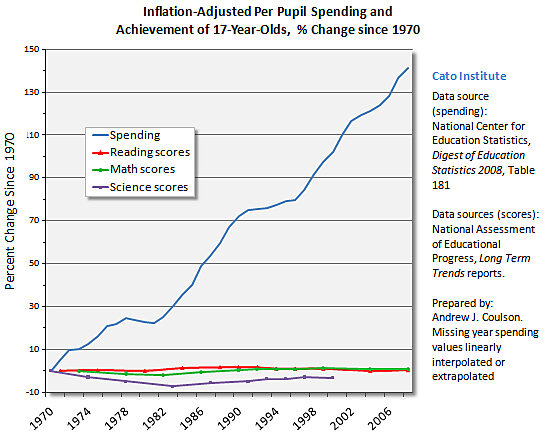 Hmm. As we see here, total expenditures per pupil are nearly two-and-a-half times higher today than in 1970, after adjusting for inflation, while student achievement toward the end of high school has been flat or has even declined slightly (in science). 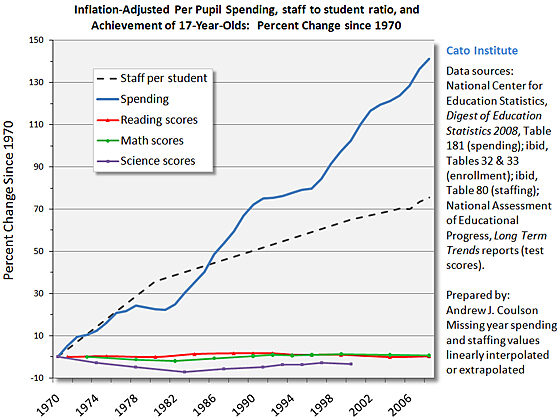 What can we conclude from the above charts? By calling for a big increase in government education spending as a way to boost the U.S. economy, the president is doubling down on a bet that has already been lost, repeatedly, by his predecessors. Love isn't the only thing money can't buy. It can't buy you an improved public school system either. And by extension, higher government education spending won't buy you a better economy.

If the president goes ahead with his plan to spend billions more on public schooling, he'll be driving this country deeper into dept for no good reason at all... unless of course you consider swelling the ranks of the public school employee unions a good reason.