The Manifest Presence of the President

“The president’s presence is already late to this crisis”: that weird phrase comes from yesterday’s widely shared editorial in the Baton Rouge Advocate: “Vacation or not, a hurting Louisiana needs you now, President Obama.” It’s not just the man himself who’s missing: it’s his “presence.” “A disaster this big begs for the personal presence of the president at ground zero,” the editorialist insists. 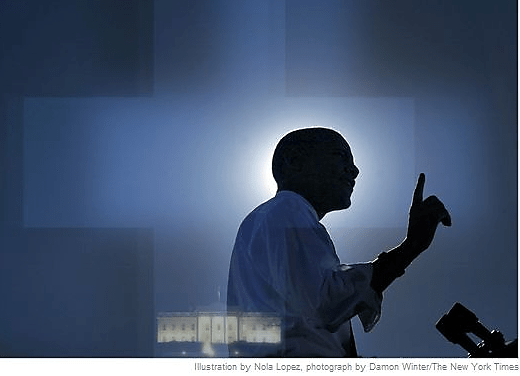 But why? Well, “it’s what chief executives sign up for when they take the oath of office.” Does it help? The Advocate acknowledges that “sometimes, presidential visits can get in the way of emergency response, doing more harm than good,” but that won’t happen in this case. OK, even if it won’t do more harm than good, what good would it do? “In coming here, the president can decisively demonstrate that Louisiana’s recovery is a priority for his administration–and the United States of America.” Or he could demonstrate that by declaring the affected region a disaster area, freeing federal funds for assistance and recovery under the Stafford Act, like he’s already done. Still, “the optics of Obama golfing while Louisiana residents languished in flood waters was striking.”


Perhaps it’s harsh to point out that there’s not a single line of rational argument in the piece—after all, the editorialist is understandably upset about the suffering friends and neighbors have endured over the last week. But for most of the people sharing it, like Governor Scott Walker (R-WI), it’s content‐​free partisanship, as complaints about presidents golfing invariably are. Here’s the Washington Times grousing: “Obama puts vacation above American people amid deadly Louisiana flooding,” and Howie Carr snarling that while: “In Eastman, Georgia, a cop, a father of three, is murdered in cold blood by a gunman identified as Royheem Delshawn Deeds, who is later arrested in Florida…. Obama golfs at the Farm Neck Golf Club.” I confess I don’t see the connection.


The Drudge Report regularly intersperses an obsession with the president’s golfing habit with various crackpot theories about his real agenda, cheerlessly oblivious to the inconsistency: “He’s a Kenyalinskyite anti‐​colonialist crypto‐​Muslim Brotherhood agent with a plan to destroy America. Wait, the SOB is playing golf again? Get to work, damnit!”


But there’s also something going on here that transcends partisanship. Not long ago, the Washington Post pointed to “A growing role for the president: America’s consoler in chief.” It’s the Veep’s job to show up at funerals, and, it’s become the president’s job to manifest himself at disaster areas and other tragic scenes. The first Lexis reference I can find to the president as “consoler‐​in‐​chief” comes from an AP story from 1993, “Clinton’s Hugs: Therapy for the Nation,” exploring whether the 42nd president’s touchy‐​feely approach would lead to questions about his toughness. In the years since, those sorts of concerns have vanished, as the “Consoler” role has taken on an increasingly mystical and totemic aspect: “the president’s presence.” As former George W. Bush aide Karen Hughes put it in the Post piece, “the presence of the president has become a visible symbol of the presence of the American people, of their love and their concern and their prayers.”


This is an utterly batty way for people to talk about elected officials, and easy to laugh off: will Donald Trump or Hillary Clinton acquire this numinous aura come January 2017, incarnating our “love and concern and our prayers,” our very presence? That’d be weird.


But there’s something atavistic, and distinctly unsettling, about investing quasi‐​religious aspirations in a civil officer and fallible human being. And our insatiable demands for executive compassion drive the growth of executive power. When presidents are too slow out of the gate showing that they feel our pain, they often make up for it by seizing more power, as Obama did with the BP oil spill, and Bush did after Katrina. Sending the message: I care doesn’t always stop with photo‐​ops and FEMA grants.