As a solution, the article's authors propose pregnant women would be better off with additional government protection, perhaps similar to the protection afforded to Americans with disabilities. The Times should be careful what it wishes for.

While arguing for added protections for pregnant women, the Times forgets to mention that rights to accommodation for people with disabilities didn’t work out as planned. One study finds the Americans with Disabilities Act (ADA) of 1990 reduced “employment of disabled men of all working ages and disabled women under age 40.”

Other evidence finds the ADA reduced employment rates for men with disabilities by 7.2 percentage points and was “associated with lower relative earnings” and “slightly lower labor force participation rates” for people with disabilities.

Figure 1: Employment Rate Through Time for Persons with and Without Disabilities, Ages 21-64 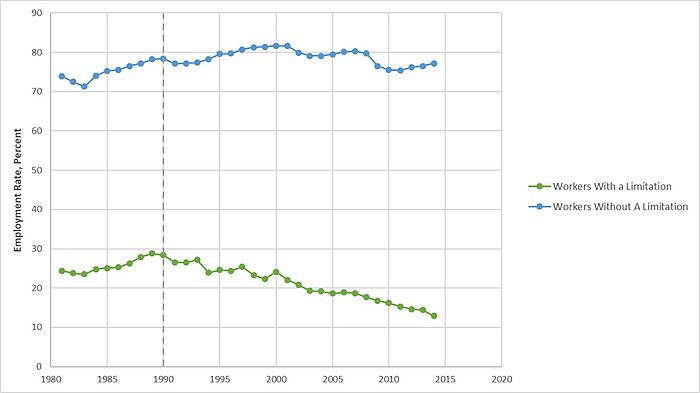 Data Source: Census Bureau's Current Population Survey
Measuring disability prevalence accurately can be difficult, so some individuals take issue with these results. But other survey data that use different definitions corroborate these trends (e.g. NHIS and SIPP).
Moreover, disability prevalence did not decline in a way that might indicate ADA genuinely helped many persons with disabilities find jobs and left a more difficult-to-employ population behind. The proportion of Americans with a work-limiting disability has grown since ADA implementation.
Figure 2: Disability Prevalence Through Time, Ages 21-64 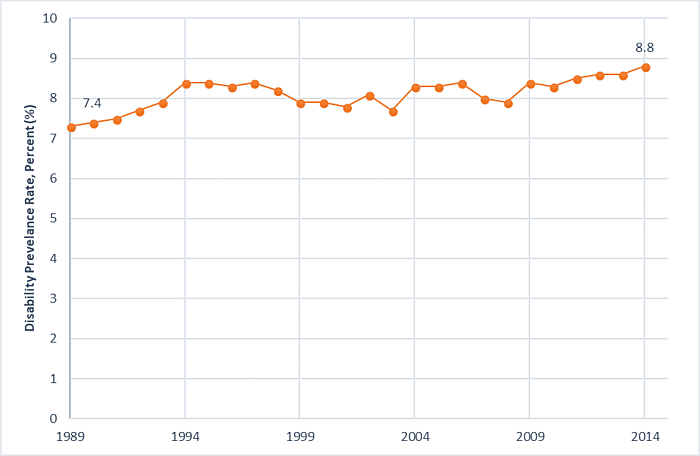 The government was trying to help people with disabilities, so why did ADA hurt their employment prospects?  A 2010 study examining the ADA 20 years after its passage concludes

“The unclear expectations on what constitutes appropriate accommodations for people with disabilities is likely having a chilling effect on the employment prospects of the disabled population. Fears of costly litigation and administrative grievances are driving some employers to be suspect, if not downright hostile, to hiring workers with a disability. Reflecting an all too common irony in social policy, the ADA might be having the exact opposite effect of the intent of the legislation.”

divAccording to the Times, pregnant women should have the same accommodation rights. But if pregnant women knew about the impact of the ADA on disabled population, fewer might be interested in this form of government “protection.”

[1] Note that these figures don’t provide evidence of that per se.