Since the Affordable Care Act came into effect in September 2010, its dependent coverage provision has mandated that insurers allow children to remain on their parents’ plans until age twenty-six. According to some polls, it is the single most popular provision in the law, enjoying high levels of support from Independents, Democrats, and Republicans alike. This is a marked contrast to the law as a whole, which remains unpopular to this day.  The Obama administration has pointed to increasing insurance coverage among young adults as a sign of the provision’s success. A new working paper might dampen some of this fanfare, as the researchers find evidence that the dependent coverage provision led to reduced wages of roughly $1,200 a year for affected workers. Policies and choices have trade-offs, and this mandate is no exception.

Popularity of Select Provisions of the Affordable Care Act 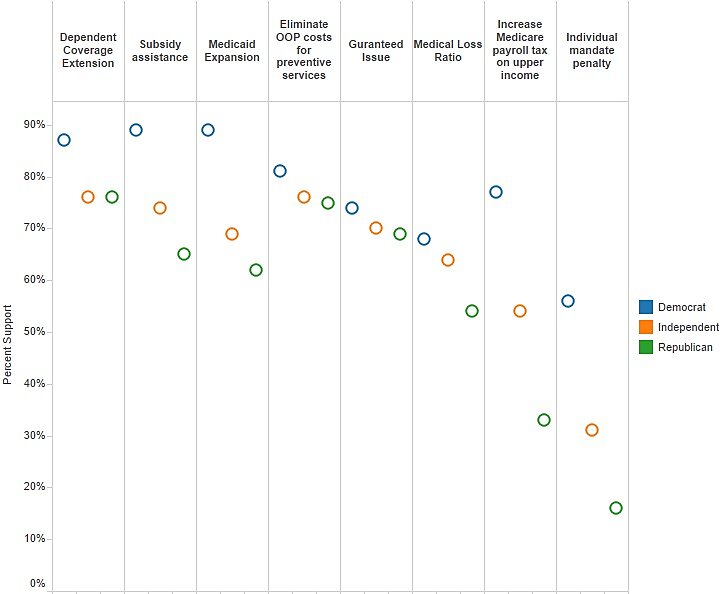 Prior to the ACA, some states had passed some form of extended dependent coverage mandates, while others had not. The researchers were able to exploit this variation, using the states with prior mandates as a control group. They estimate that the dependent coverage provision reduced wages by roughly $1,200 per year for workers 26 and older. As might be expected, firms that offer health insurance are more affected than those that do not. Somewhat more surprisingly, they find that workers with eligible children are not the only ones affected: there is some degree of pooling and childless workers see wage reductions as well. These findings also imply at least a moderate level of crowd-out, meaning that some proportion of the young adults gaining coverage shifted from other forms of coverage. The authors also failed to find any significant change in labor supply resulting from the reductions in wages, but suggest one possible explanation may be the timing of the provision’s implementation in the weak labor market in late 2010. Parents might value the extended insurance coverage the provision allows, and some young adults who gained coverage might be better off, but these changes come at a cost in the form of reduced wages.

The dependent coverage provision is one of the most broadly popular aspects of the health reform, and it does seem to have increased insurance coverage among the target population to some extent. These gains come with trade-offs, however, and this evidence indicates that workers at affected firms saw wage reductions of about $1,200 per year. Favorable reports citing increased health insurance coverage should take this new evidence into account. Once the costs are fully understood, the provision might not be quite as popular.