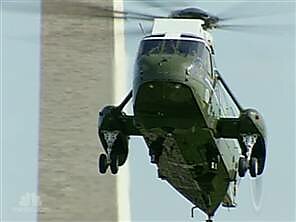 In Washington, the symbolic almost always trumps the substantive. Thus, legislators complain, for good reason, about pork and earmarks, which ran about $35 billion at their maximum, and ignore entitlements, which entail some $100 trillion in unfunded liabilities.


So it is with President Obama. He continues the endless bailouts, which cumulatively now run around $13 trillion. He proposed a $3.6 trillion budget and will leave us with a $1.4 trillion deficit next year–and nearly $5 trillion in additional debt on top of the massive deficits already projected over the coming decade. But he asked his Cabinet officers to chop $100 million in administrative expenses.


And he says he doesn’t need a new helicopter. Fiscal responsibility in action.

At a Washington conference on fiscal responsibility in February, President Obama tried to set the tone by saying he did not need the new costly presidential helicopters that had been ordered by the Bush administration.


“The helicopter I have now seems perfectly adequate to me,” he said to laughter. On a more serious note, he added, “I think it is an example of the procurement process gone amok. And we’re going to have to fix it.”


But the president is learning that in the world of defense contracting, frugality can be expensive. Some lawmakers and military experts warn that his effort to avoid wasting billions of dollars could end up doing just that.


The administration’s plan to halt the $13 billion helicopter program, announced this month, will leave the government with little to show for the $3.2 billion it has spent since the Bush administration set out to create a futuristic craft that could fend off terrorist attacks and resist the electromagnetic effects of a nuclear blast.


Critics say the Pentagon would also spend at least $200 million in termination fees and perhaps hundreds of millions to extend the life of today’s aging fleet. As a result, several influential lawmakers and defense analysts are now calling for a compromise that would salvage a simpler version of the helicopter that is already being tested.


They say it could be a more palatable alternative in tough economic times than seeking new bids for a more advanced craft, which has proved difficult to develop.

No wonder Washington is known as a place where everything about government is permanent. Once you start spending money on a program, it becomes extremely hard to stop. Part of that is the political dynamic of interest groups, the problem so well dissected by the Public Choice economists. And part of it is legal and procedural. Contracts are let, cancellation fees are due. It’s bad to waste money on a gold‐​plated helicopter. It seems even worse to waste money developing a gold‐​plated helicopter, and then getting nothing at all by canceling it.


There is, however, an amazingly simple solution, of which Congress and the president apparently are not aware.


Don’t spend the money in the first place. Eschew new programs. Say no to special interests. Let taxpayers keep more of their own money.


This approach would seem to make sense at any time. But especially today, with the federal government facing a deficit approaching $2 trillion in 2009.


Didn’t Nancy Reagan lecture us to “just say no”? We should invite her back for a return tour of Washington, only she should talk about federal spending this time.