The Political Novel for this Election Season

I'm a few months late on this, but while the Supreme Court was figuring out what to do with Obamacare this spring, a work of political fiction came 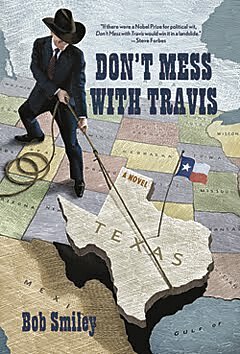 out that captures the tone in Washington better than any number of Bob Woodward tick-tock tomes.  It's called Don't Mess with Travis, the fantastical tale of a homespun Texas governor facing off against an elitist president who rides roughshod over the Constitution.

[Full disclosure: The author, Bob Smiley, was a college classmate of mine, and he asked me to blurb the book, which I was happy to do because I enjoyed it so much.]

The plot, which perhaps had a bit more resonance when Rick Perry was riding high in the polls---and thus would've made the book a bestseller had Perry become the nominee---involves an unlikely state senator who finds himself governor when the two men ahead of him drive off the only cliff in the Lone Star State.  Once in power and faced with the reality of an out-of-touch White House steering the country toward a cliff of its own, Travis pursues what he sees as the only sane option: secession!

Smiley mixes the best of Carl Hiaasen with touches of George Will here, but the novel is more than just a witty blend of larger-than-life characters and prescient political narrative: it’s intelligent satire, true on both the human and policy dimensions.  The author---a Hollywood TV/film writer by day---may well become this generation’s Christopher Buckley.

In short, when you're taking a break from reading my colleagues' latest policy analyses or, of course, the Cato Supreme Court Review, I recommend Don't Mess with Travis.