Pervasive Misconduct and Corrosive Culture at the TSA

A new report from the House Homeland Security Committee lays bare the culture of misconduct that continues to plague the Transportation Security Administration (TSA), finding a surge in complaints and a pervasive lack of accountability at the agency.


This comes on the heels of another significant increase in cases of employee misconduct at the TSA, as a 2013 investigation from the Government Accountability Office (GAO) reported a 27 percent increase from fiscal years 2010 to 2012. In response to that earlier report and the GAO’s related finding that the TSA did “not have the process in place to adequately address it,” the TSA installed adopted many of the GAO’s recommendations for investigating misconduct in an attempt to finally bring some effective oversight and accountability to the troubled agency.


Despite those efforts, there has been no slowdown in the surge of misconduct allegations filed against TSA employees: misconduct complaints increased by 28.5 percent from fiscal year 2013 to 2015 while the number of full‐​time equivalent employees grew by only 1.6 percent.


These allegations range from relatively mundane but still troubling offenses like a failure to follow instructions and failure to report to duty to more egregious cases like an officer being charged with facilitating human smuggling and allegations of sexual misconduct by officers.


The concerns go beyond just the sheer number of complaints or the recent surge, it’s that there are so many employees that have allegedly committed some form of misconduct multiple times: roughly 43 percent of the employees with a complaint had more than one, almost 5 percent had more than 5, and one ‘enterprising’ employee had 18 separate complaints during fiscal years 2013 to 2015. Despite the long‐​recognized problems contributing to a culture prone to misconduct, there do not seem to be consequences for these TSA employees. As the report says “it appears as though minimal accountability is provided with certain employees engaged in ongoing misconduct.”


Number of Complaints among Employees with Filed Complaints, FY 2013–2015 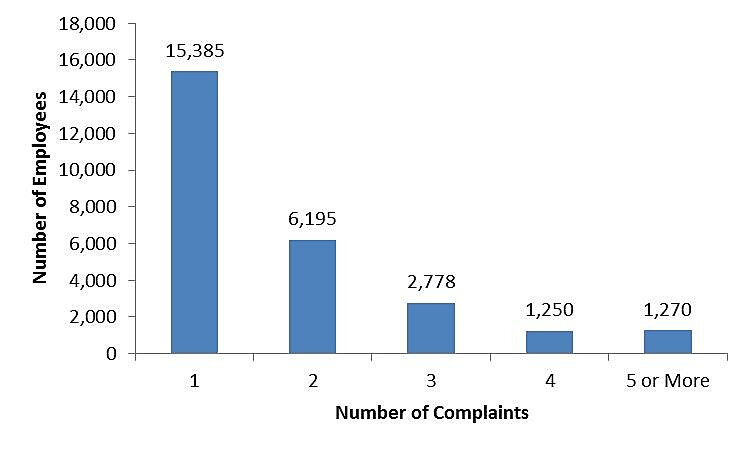 
This recent surge in complaints might be due to the perception that allegations of misconduct will not be thoroughly investigated, and this does not seem to be baseless: even as the number of complaints increased substantially, the number of investigations over this same period declined by 15 percent, while the number of investigations closed fell by 28 percent. Even within the shrinking pool of cases where the agency takes some action, fewer employees faced real consequences, as “TSA increased the use of non‐​disciplinary actions by almost 80 [percent], while it decreased the use of disciplinary and adverse actions by 14 [percent] and 23 [percent], respectively.” In most cases, TSA employees can think it is plausible that they can avoid being investigated should they have a complaint filed against them, and if there is ultimately a decision against them, the most likely reprimand will be non‐​disciplinary actions like counseling, guidance, or additional training.


Employees within the TSA who might have tried to bring attention to some of the agency’s problem may have faced some form of backlash, as almost a dozen individuals told staffers that “certain senior leaders at TSA have reassigned employees to other locations around the country as retaliation for, in some cases, employees raising security concerns.” Far from moving towards more transparency and attempting to address the ongoing misconduct that seems to be so prevalent in the agency, some senior level employees could be undermining these efforts. Outside agencies and Congress have also lamented their limited ability to investigate these concerns because the agency has not been forthcoming with requested data. 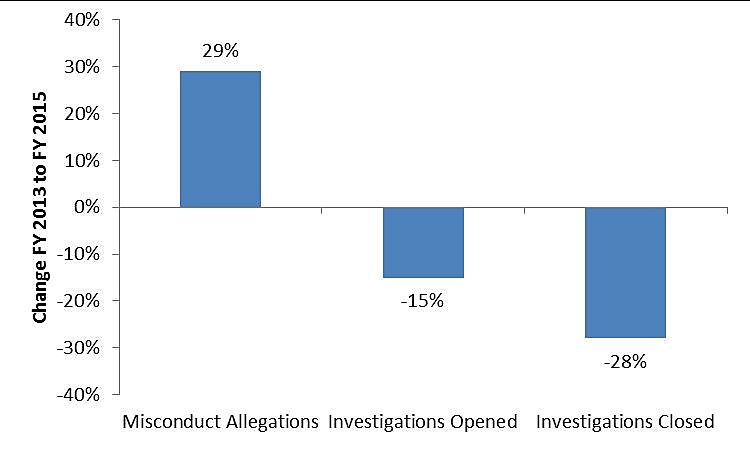 
Beyond these concerns about misconduct, other investigations have revealed the TSA to be ineffective and prone to security failures. My colleague Chris Edwards has an insightful policy analysis laying out the case for privatizing the TSA and following the lead of most airports in Europe and Canada that use private companies for screening procedures. As he explains, allowing competitive bidding to multiple companies could finally bring a degree of accountability to the sphere, something that is sorely lacking at the TSA.