Personal freedom around the world has seen a notable decline since 2008, according to the Human Freedom Index 2020 published today by the Cato Institute with the Fraser Institute in Canada. The index uses 76 indicators of personal, civil, and economic freedoms to rank 162 countries from 2008 to 2018, the most recent year for which internationally comparable data is available.

Overall freedom has also declined, though to a lesser degree, over the same time period. Of the 12 major categories that we measure in the report, all but five have seen some deterioration, with freedom of religion, identity and relationship freedoms, and the rule of law seeing the largest decreases.

New Zealand and Switzerland are ranked in the top two spots, with Hong Kong coming in third. My coauthor Fred McMahon of the Fraser Institute and I note that the territory has been losing freedom during the past 10 years and we expect future editions of the index to show notable declines in Hong Kong’s ratings and rankings, especially given Beijing’s aggressive interventions there in 2019 and 2020. 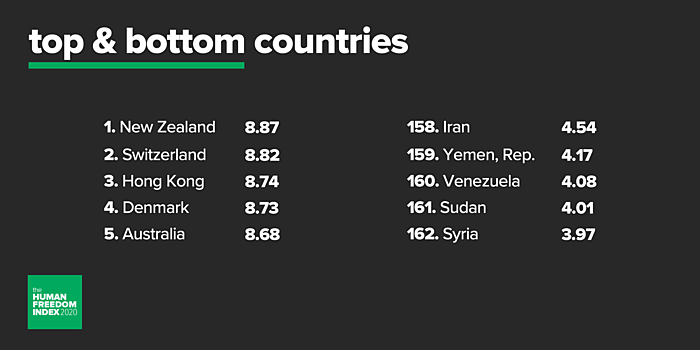 The United States ranks 17th and has begun a decline in its level of freedom in 2018 after years during which it had been regaining lost ground from a previous decline. Its drop in economic freedom in 2018 exceeds its decline in personal freedom.

The report continues to find a strong, positive relationship between freedom and prosperity, but also finds that here is an unequal distribution of freedom in the world. Fifteen percent of the world’s population lives in the freest quartile of countries in the index, while 34 percent lives in the bottom quartile of countries. The gap in freedom between the most free and the least free countries has also been increasing since 2008.

Find out where other countries and regions rank and how they have performed over time here.