There are major spending battles on the Washington agenda this year, including over the defense budget. Congress needs to decide whether to stick with capped spending levels agreed to in 2011, or allow its past restraint efforts to unravel.


Republican defense hawks want to bust the spending caps, while the small‐​government wing of the party wants to hold the line. Rep. Justin Amash (R‐​Mich.) told the Wall Street Journal, “We’ve been spending too much on defense for years because we have a lot of waste within the Department of Defense … There’s room to cut, and I think we are perfectly capable of staying within the sequester caps.” Sen. Rand Paul (R‐​Ky.) noted, “To defend ourselves, we need a lean, mean fighting machine that doesn’t waste money on a bloated civilian bureaucracy.”


Amash and Paul’s position is buttressed by a new GAO study on the management bloat in Department of Defense (DoD) headquarters.


It is also buttressed by looking at DoD civilian and uniformed employment levels. The chart below shows that civilian DoD employment has grown 105,000 since 2001, while uniformed employment has grown just 22,000. Based on numbers in the chart, the ratio of bureaucrats‐​to‐​soldiers has increased from 47 percent in 2001 to 54 percent in 2014. But with the advance of computer power and other technologies, one would think that the bureaucratic overhead costs of our fighting force would be falling over time, not increasing.


How much could we save by improving bureaucratic efficiencies, and cutting the number of Pentagon civilians by at least the apparent excess of about 100,000? Annual pay and benefits for federal civilians is about $120,000 a year, so we could save roughly $12 billion a year by trimming this aspect of Pentagon bloat. 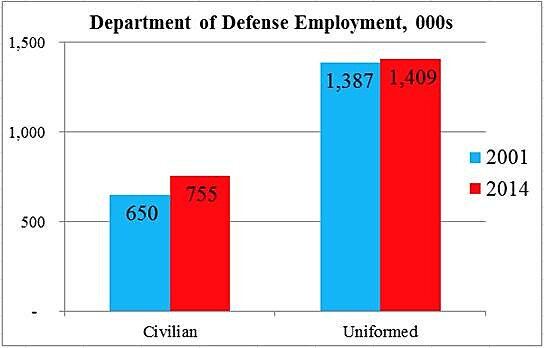 All data from the “Analytical Perspectives” sections of the FY2003 and FY2015 federal budgets. Data for 2014 are OMB estimates.