Many articles in recent years have expressed concern about Pentagon bloat. Mackenzie Eaglen called for streamlining the Pentagon’s “army of bureaucrats.” Ray Mabus said “Twenty percent of the Pentagon budget, one dollar out of five, is spent on … the Office of the Secretary of Defense and the defense agencies … Pure overhead.”


Robert Gates said the Pentagon is a “gargantuan, labyrinthine bureaucracy,” where 40 percent of spending goes to overhead, and there are 30 layers of staff under the secretary. Fareed Zakaria called the Pentagon “some kind of gigantic socialist enterprise.”


My favorite bureaucracy story is the recent one about the admiral in charge of navy intelligence who has not been allowed to see any secret intelligence for two years. That is pretty absurd, even for a socialist enterprise.


One measure of Department of Defense (DoD) bureaucracy is the number of civilian (non‐​uniformed) employees, as shown in Chart 1. (Data from the new federal budget and prior ones). 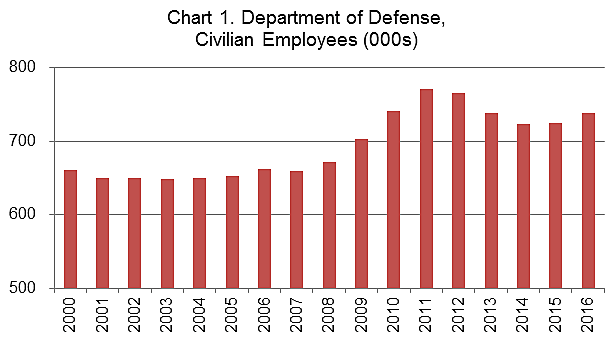 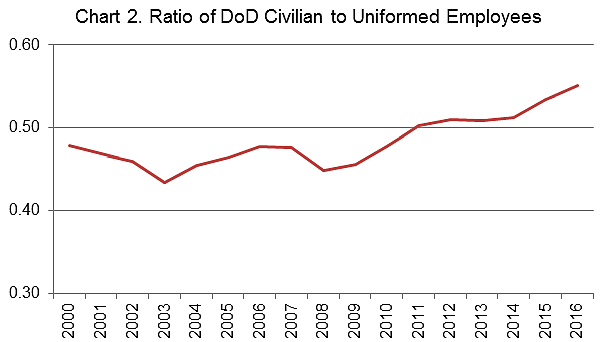 The relative increase in the civilian bureaucracy is a concern. One might think that Pentagon productivity would have increased because of advances in technology. Shouldn’t procurement be more efficient these days, as we’ve moved from paper forms to electronic databases? Apparently, such gains from technology have been dissipated elsewhere. John Lehman says: “With so many layers and offices needed to concur on every decision, it now takes an average of 22½ years from the start of a weapons program to first deployment, instead of the four years it took to deploy the Minuteman ICBM and Polaris submarine missile system in the Cold War era.”


Aside from wasted cost, the more bureaucratic bloat there is, the more it saps the energies of our uniformed service members. John Lehman estimates that “roughly half of all uniformed personnel serve on staffs that spend most of their time going to meetings and responding to tasks from the hundreds of offices that have grown like mold throughout the vast Defense Department.” The fault, of course, lies not with the service members, but with the complex and top‐​heavy system that Congress and Pentagon leaders have built over the decades.