PDK: Charter Schools Finally As Popular as Education Tax Credits Have Been Since Before Clinton’s Impeachment

The new PDK/​Gallup education poll for 2010 is out, with the standard problems we can expect from this pro‐​government school/​anti‐​choice outfit. Randi Weingarten even gets some column space! Oh Randi, you proud yet humble teacher. The “Commentary” sidebars in general were cringe‐​inducingly hackish and treacly.


It is interesting that there was a big spike in the percentage of people saying the biggest problem schools must deal with is a lack of funds. They’ve done a great job convincing folks there’s no money.


Of course, the way the question is worded, it encourages respondents to think about the difficulties schools are facing, which despite their flush accounts probably is dealing with funding issues. I’d like to see the answers to “What do you think are the biggest problems preventing the public schools of your community from increasing student achievement?” or some such question. And they certainly should ask how much people think is being spent. “The Research Organization formerly known as Friedman Foundation,” or TROFKAFF, has some great state polls showing how horribly misinformed most people are about the spending issue.


PDK is still boycotting the voucher question for a few years running.


But what is really indefensible is that they haven’t asked about education tax credits since 1999, just when the policy took off. There are now 12 credit programs in 9 states. Maybe support was far too high for their taste? In 1999 support was in the high 60’s, even after a battery of questions about vouchers and pitting public reform against private choice. 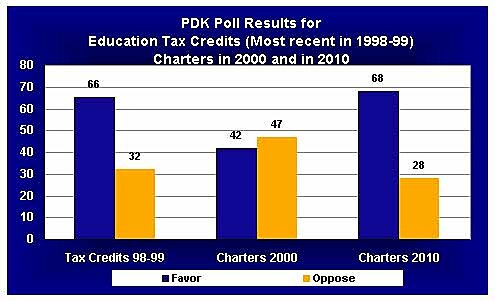 Good news for charter schools, which have finally pulled ahead of the support credits enjoyed during the Clinton administration, thanks no doubt to an increase in support among Dems/​liberals courtesy of Obama lip‐​service. PDK; update please.