With the backdrop of the shutdown and federal workers going unpaid, the New York Times published a backgrounder last week on federal compensation. It was a fair and balanced piece and highlighted themes discussed in this study on government workers.


The NYT charts government and private sector wage growth. Average federal wages soared during the 1990s and 2000s but have grown more slowly this decade. However, overall federal compensation including benefits has grown briskly in recent years, as I chart below.


Here are highlights from the NYT story:

Verla Bloomfield has the kind of workplace that seems plucked from a different era. She has a pension, a union, several weeks of vacation and a paycheck that has nearly doubled in 14 years. Her employer? The United States government.


… Since 2000, average pay has grown twice as fast for federal employees as it has in the private sector. That’s partly because the federal work force has become more educated and specialized. It is also built into the job. Even without the salaries that top performers can command in the corporate world, government workers who do well are entitled by law to regular pay increases, an increasingly rare guarantee elsewhere.


… As globalization has shuttered factories and decimated entire industries, federal employment has been a bastion of stability.


… But the reality is that people who have held onto their government jobs for many years have not languished in the same role at the same pay grade. They have progressed up the ladder and benefited from regular raises at least every few years. They all have pensions and almost all have health insurance, perks that are harder to come by as an employee in corporate America.


… [Federal worker] Ms. Bloomfield would take stability over a six‐​figure salary in the private sector any day. Her brother earns much more than she does in technical support in Austin, Tex. But he’s had to switch employers multiple times in the last 20 years because of corporate restructuring and layoffs. “Even though he makes a high wage, he has to live with this uncertainty,” she said. “We don’t have that stress.”


Steve Fosse, a revenue agent with the I.R.S., isn’t sure whether that trade‐​off is worth it anymore. The first person in his family to graduate from college, Mr. Fosse, 39, took a job with the government because it offered reliability. “I wanted the benefits and the guaranteed paychecks,” he said. For the most part, that dream panned out. Mr. Fosse earns $90,000 a year…

The NYT uses data from the Bureau of Economic (BEA) for its pay comparisons. Federal worker wages averaged $90,794 in 2017, which was 48 percent higher than the private sector average of $61,311. But as the NYT article indicates, gold‐​plated benefits are a key advantage that federal workers enjoy over private‐​sector workers.


The chart below shows BEA data on total compensation, wages plus benefits. Compensation averaged $130,429 for federal workers in 2017, which was 79 percent higher than the private‐​sector average of $72,992.


The comments by Bloomfield and Fosse in the article illustrate another point. As I discuss here, high job security is an additional government benefit that should be considered when comparing federal to private compensation levels.


The shutdown has disrupted the lives of federal workers, but generally they have a good thing going with pay, benefits, and job security. If Congress ever gets around to tackling bloat in the federal budget, excessive federal benefits would be a good place to find savings. 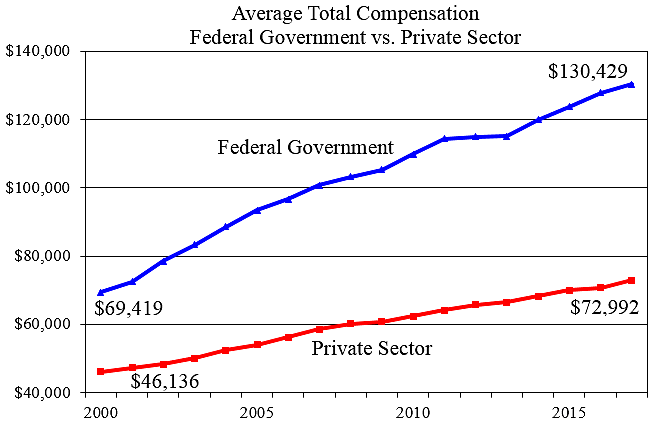