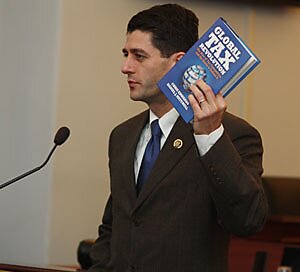 Paul Ryan is an excellent choice as running mate for Mitt Romney. He understands federal spending and tax policies in enormous detail. He has said that he started reading federal budgets when he was in high school. He’s also read Global Tax Revolution, my book with Dan Mitchell about the implications of globalization and tax competition. He knows that the American economy will not thrive with high tax rates, especially on business income and capital. He shares Mitt Romney’s goal of chopping the corporate tax rate to revive investment and job creation.


Ryan is an articulate defender of free enterprise, and he consistently argues not just for the practical advantages of smaller government but also about the moral imperative to cut. America will face giant fiscal and economic emergencies unless we make major reforms to the government. Mitt Romney, of course, has had a rather mixed record regarding free markets and limited government. And Ryan–as a good politician–has compromised many times as well. But if the next administration is Republican, and if it decides it wants to push major reforms, Paul Ryan is uniquely qualified to lead the charge.